The Forum's Jewish Co-Chair Heather Fletcher was invited to speak on behalf of the Forum at the launch of the Manchester Council of Mosques in the Great Hall at the Town Hall on Sunday 22 February 2015. Her speech is reproduced below.

Good afternoon, ladies, gentlemen and distinguished guests. I am delighted to be invited here today to address you at the launch of the Manchester Council of Mosques.

Almost ten years ago I made one of the best decisions of my life to become involved in the Muslim Jewish Forum of Greater Manchester. For 9 years I was the Company Secretary of the Forum and last month I was thrilled to be elected to the role of Jewish Co Chair. I am just as delighted to be giving my first speech as Co Chair here today in this magnificent Great Hall at our Town Hall and on this very auspicious occasion.

One of the most exciting things for me has been the growth of our organisation from a hardcore of 10 people led by the late Henry Guterman and Afzal Khan MEP to a mailing list of over 500 people. The objective of our Forum was to develop cultural ties between the Muslim community and Jewish community here in Manchester. I feel that through holding over 70 diverse events in the past ten years we have played some part in helping our two communities become more acquainted with each other. Last November, we held a “twinning event” between the Central Manchester Mosque and Jackson’s Row Reform Synagogue, which was one of our best ever events and I hope it will be repeated this November. Our organisation was also very proud last January when we were awarded a national British Muslim Award for “Spirit of Britain”

Before I joined the Forum, I only ever had one Muslim friend, who was a workmate and I knew very little about Islam, apart from what she had told me and I had never visited a Mosque, but since I have been involved  I have learned that our faiths and cultures have so much in common. Not only have I learned a considerable amount about Islam but I have also definitely learned more about my own faith as well!

Our Muslim and Jewish communities have much to unite us and we can be very powerful allies against those who seek to divide us such as the far right, the EDL and Britain First. We can also act together in a very practical way against assaults on our ancient practices such as ritual slaughter. Indeed an online petition to protect religious slaughter has just been signed by over 100,000 people, mainly Muslims and Jews, in only 9 days so this issue can be debated in Parliament tomorrow. This petition was commenced by our Co-Chair Mohammed Amin in response to a petition brought by the BVA to end non stun slaughter to promote animal welfare.

Finally, it is my belief ,from my experience over the past decade, that communities mixing together and getting to know each other is the best way to achieve community cohesion .It is ignorance and fear of others which causes suspicion and intolerance but it is  understanding and bonding which promotes peace and harmony.

I wish the MCOM all the very best and I am positive you will continue to promote good relationships with all communities here in Manchester. I look forward to our Muslim Jewish Forum working with you in the future. 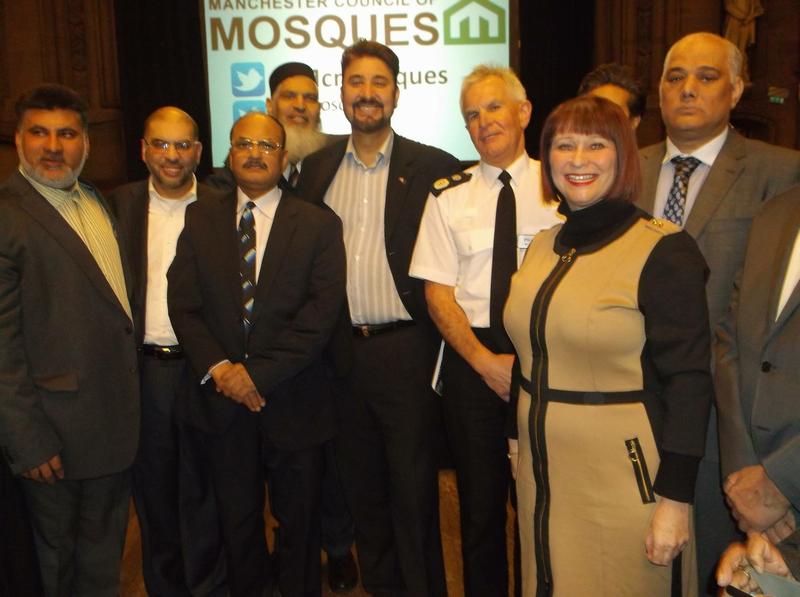