The Ramadan Tent Project aims to hold iftars around the UK which are open to people of all faiths and none. Our Co-Chair Mohammed Amin was recently asked if he would speak about the Muslim Jewish Forum of Greater Manchester at an iftar to be held at Manchester University, and was delighted to do so.

The event took place on the evening of Wednesday 14 June 2017 and had a predominantly student audience at Manchester University comprising both Muslims and people of other faiths and none. Mohammed Amin spoke from a prepared text and we have reproduced that prepared text below.

The photograph below (which can be enlarged by clicking it) shows the speakers at the event, as well as two of the organisers. There are more photographs on Adam Kelwick's Facebook post about the event. 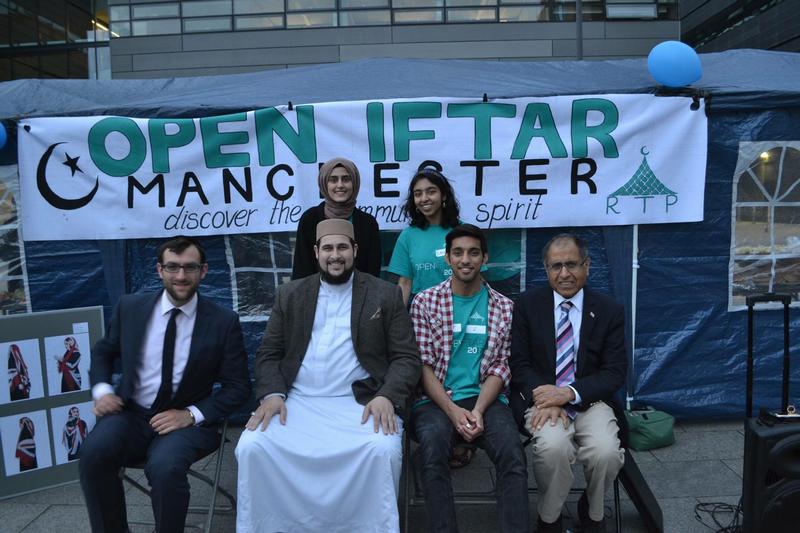 The speakers are seated, from left to right:

Two of the organisers are standing behind the speakers. Sidra Iftikhar who is wearing the green T-shirt was the person who organised Mohammed Amin's attendance.

Good evening and assalaam aleikum. Standing here tonight makes me feel very nostalgic. I came to Manchester from Pakistan in 1952 at the age of 1¾. For my first 10 years in Manchester, the house where we lived was about 200 yards from here. That was over half a century ago.

I have been asked to talk about the Muslim Jewish Forum of Greater Manchester. Very briefly, I want to cover the following:

Why does this matter?

Muslims and Jews circumcise their sons. Many in the other 94% want to ban circumcision.

Religiously based hatred, even violence, is a much more serious issue for Jews and Muslims than it is for most communities in the other 94%.

Muslims and Jews want to bury their dead very quickly after someone dies. That does not apply for the other 94%.

Muslims and Jews want to be able to observe their religious holidays. That is not a problem for Christians since the country’s calendar already builds in the most important Christian festivals, namely Easter and Christmas.

I could go on with this list. The key point is that on very many issues, Muslims and Jews have exactly the same concerns. Our voice is far louder, and our lobbying is more effective, if we do that together than as separate communities.

That is the fundamental reason why we set up the Muslim Jewish Forum of Greater Manchester.

2. How the Forum came about

In 2004, I received an invitation from Manchester Town Hall. It came from the Deputy Lord Mayor at that time, Councillor Afzal Khan. Last week Afzal was elected as the new MP for Manchester Gorton. The invitation was co-hosted by a Jewish chap, Henry Guterman MBE, sadly since deceased. Henry was a former President of the Jewish Representative Council of Greater Manchester and Region. He had come to Manchester as a child as a refugee from Nazi Germany after Kristallnacht.

The invitation was to listen to two individuals from London. Rabbi Herschel Gluck and Ismail Amaan. They talked about their Muslim Jewish dialogue group in North London.

A few months later there was another public meeting. This was to discuss whether we should set up a similar forum in Manchester. I was one of the people who volunteered to help set it up. I ended up writing the constitution along with a Jewish barrister, David Berkley QC. I was the Treasurer until 2013 and have been one of the two Co-Chairs since then.

3. Some examples of what we have done

Our website has a list of all of our past events. To find it, the URL is muslimjewish.org.uk You don’t need to remember it. If you Google the two words Muslim Jewish, today are over 40 million results. We are normally in the first 10. Not bad for a small voluntary organisation!

On the website, look for past events. I just want to pick a few items to mention.

Let me start with halal and kosher slaughter

Both Muslim and Jewish organisations spread this petition throughout the UK. In only nine days, we got the hundred thousand signatures that we wanted. Remember, it took the British Veterinary Association nine months. When their petition was debated in Parliament, ours was also mentioned several times. That is what you achieve by working together.

"We Stand Together" is a national initiative led by the police to combat hate crime. The national launch of this initiative was in Manchester, in March 2015, at Manchester Town Hall. We had the great and good speaking from Manchester City Council, from Greater Manchester Police etc. There were only three outside speakers, a Christian, a Muslim and a Jew.

I know that sounds like the beginning of a joke! The Muslim and Jewish speakers were me and my Jewish co-chair Councillor Heather Fletcher.

If you look at the list of past events on our website, you will see an enormous number of events where we just get together and eat. It is not just because we like food. We believe in bringing people together in informal ways so that Muslims and Jews can get to know each other.

4. Why I think it is a success

The forum has won awards. While that is nice, that is not really how you measure success.

What is much more important to me is the amount of media coverage we have had over the years. We may have an event with 40 people, but thousands learn that it has taken place because our press release gets used by the media.

The existence of the forum led to BBC Manchester radio using me for occasional Thought for the Week slots on Sunday mornings. I have done over 30, and the next one is next Sunday. I always appear as Co-Chair of the Forum so every time I do, 50,000 people in the north-west get to hear about us.

One of our dinners got a slot on the BBC1 “The One Show.”

I have already mentioned the very high Google ranking of our website. That has led to journalists from overseas countries contacting us for interviews.

When we started, there was no formal contact between the two communities, although of course some individual Muslims and individual Jews knew each other either through business or sometimes a socially. We have helped to spread the message that Muslims and Jews in Greater Manchester get on and cooperate.

A few years ago, Manchester Islamic High School for Girls twinned with the Jewish King David High School. We did not organise the twinning, but I believe that we created the atmosphere that made the twinning possible.

When you look at the list of reasons for creating the Forum, they were all very instrumental. We wanted the Forum so that Muslims and Jews could lobby together more effectively. However, something else very important has happened over the last 12 years since we started. A growing number of Muslims and Jews are now personal friends after getting to know each other through the Forum.

5. What made it succeed

Firstly, we started with realistic goals. We have concentrated on putting on simple events that people want to attend. We celebrate that growing numbers of Muslims and Jews are involved in our events and in other cross community events. We do not worry about those Muslims and those Jews who do not get involved.

Secondly, we designed the Forum very carefully. Let me read out the key clause from our memorandum of association. That is clause 3.

This objects clause is entirely local. Sitting in Manchester, we have no power to sort out problems between Israelis and Palestinians. However, we knew that if we started to debate Israel and Palestine, it would be immensely divisive and we would talk about nothing else. That is why the Middle East is out of completely scope.

Our Forum’s example led to the start of a similar organisation in Paris. Unfortunately, they were not as rigorous as we were about setting out the ground rules. Due to divisions about the Gaza conflict of 2014, that organisation sadly disintegrated.

6. Finally, how can you get involved?

On a desktop monitor, that link is at the top of the page. On a smart phone, the link is right at the bottom of the page. If you tap on the menu, it will take you to it. Once you are on the mailing list, you will get invited to our events.