Each year on 10 August the Azeemia Foundation hosts an event in Manchester to mark Adam Day commemorating the first man who is the ancestor of all of the human race. Several members of the Muslim Jewish Forum attended this year's event.

In the picture below, Heather Fletcher is at the lectern while Afzal Khan is seated on the left. 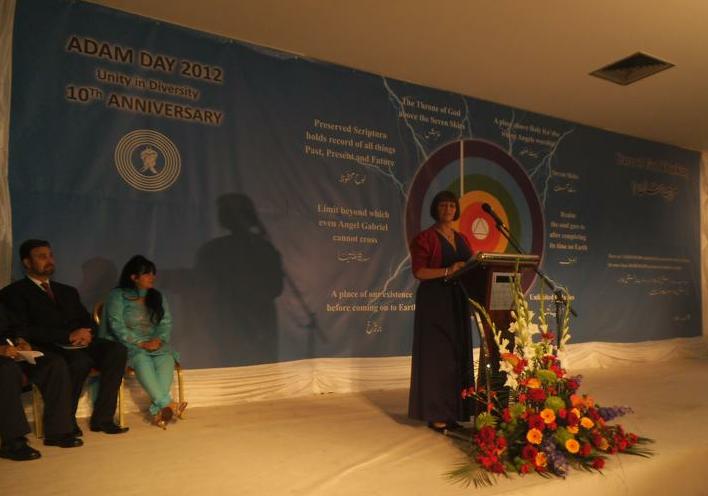 Heather also contributed a poem which was published in the event brochure and is reproduced below with her permission.

Before I read a poem, which I have written especially for this 10'th Adam Day, I would like to say a few words about the important Jewish concept of TIKKUN OLAM.

These words literally mean “World Repair” but the phrase has come to mean “Social Action and the pursuit of Social Justice”. The phrase is often used to refer to good deeds involving work carried out for the improvement of society. I think it is clear that engaging in inter-faith work is a very good example of TIKKUN OLAM as getting to know people from other faiths definitely improves our society as it reduces ignorance and bigotry and assists tolerance, harmony and community cohesion.

Due to this concept of TIKKUN OLAM the Jewish Community  has a strong commitment to inter-faith work. Indeed, the Council of Christians and Jews has been in existence for 70 years. Eight years ago this week there was the first meeting of over 100 Muslims and Jews at Manchester Town Hall. Shortly afterwards, Cllr Afzal Khan CBE and the late Henry Guterman MBE co-founded the Muslim Jewish Forum of Greater Manchester. I have been the Secretary of the Forum for the past seven years  and in that time I feel that through our activities and events we have helped to improve  relationships between Muslim people and Jewish people in Greater Manchester.

A is for the ALMIGHTY who is the Powerful Creator of us all
D is for DIVERSITY we should embrace our differences whether large or small
A is for ACCEPTANCE, we should accept all faiths and learn from each other
M is for MANKIND, the name of our family where every person is our sister or our brother.
D is for the DIVINE creation of the world around us which we view
A is for ANIMALS who were created by wonderful Creator too
Y is for YOUTH and the vital roles of every young Christian, Muslim, Buddhist, Hindu and Jew.

Put these letters together and they clearly spell out two words-ADAM DAY
When, on 10th August, we celebrate the birth of the 1st man, come what may.

Adam has linked us all together as a family since the Garden of Eden
We must celebrate this fact and also rejoice in our liberty and freedom.

When my French friends departed last month, I cried and gave them a huge, heartfelt embrace
It was evident that although we spoke different languages
We were all members of the same human race.

Let us spread meaningful messages of peace, hope and harmony in our own special way
And let us celebrate our diversity and unite as one big happy family on this AMAZING ADAM DAY !