In the last week of May, five members of the Forum visited Brussels. The group consisted of:

This was the quintet's sixth joint visit to places of Muslim and Jewish interest, the previous ones being Auschwitz, Granada, Marrakech, Dubrovnik and Paris.

On 26 May the group visited the beautiful Great Mosque of Brussels, which is the oldest mosque in Brussels situated in Cinquantenaire Park. The building was originally constructed in 1879 in an Arabic style to form the Oriental Pavilion of the National Exhibition in Brussels in 1880. After a long reconstruction by the Tunisian architect Boubaker, paid for by the Kingdom of Saudi Arabia, the building was inaugurated as a mosque in 1978. Today around 300,000 Muslims reside in the Greater Brussels area.

That evening the group dined with Walter Ruby from New York and Samia Hathroubi from Paris, both of whom work for the Foundation for Ethnic Understanding which is a US based non-profit organisation dedicated to promoting racial harmony and strengthening inter-group relations. They were co-incidentally also in Brussels as part of their interfaith work.

On 27 May the group visited the Jewish Museum and paid their respects to the memory of the four people who were murdered there by a terrorist gunman in May 2014. They also saw the impressive Great Synagogue which opened in 1875. Approximately 25,000 Jews reside in Brussels.

One of the group, Qaisra Shahraz, is a published author and has strong connections with Pakistan. Accordingly on the evening of 27 May Pakistan’s Ambassador to Belgium, Her Excellency Ms. Naghmana A. Hashmi, hosted a dinner for the group at her official residence where a number of diplomats, MEPs and Belgian Foreign Service officials gathered to hear Qaisra Shahraz reading from her work. The group were surprised and delighted to find that the ambassador had prepared much of the food herself!

On 28 May the group visited the Forum's Co-Founder and current Executive member, Afzal Khan CBE MEP who, along with his staff, gave the group a comprehensive tour of the European Parliament building.

The photograph below was taken in the European Parliament building. 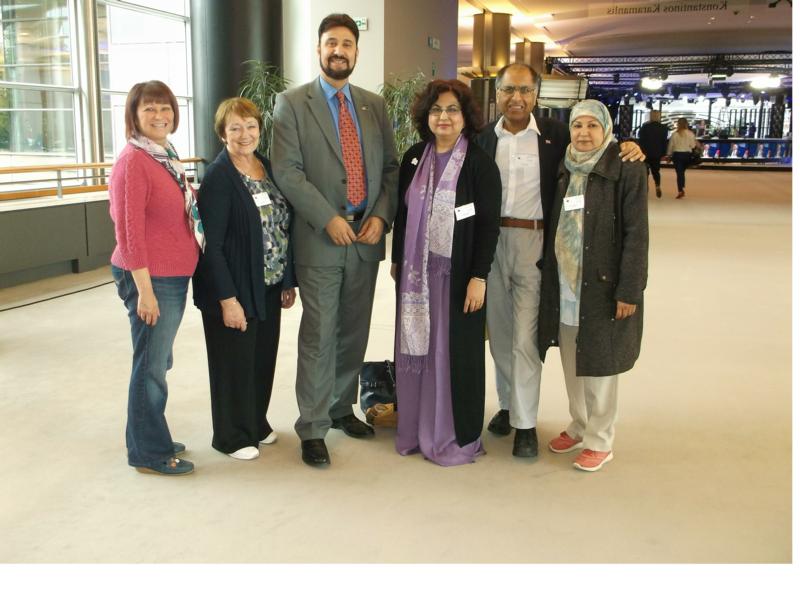