On Tuesday 15 December, we held our first ever Zoom Chanukah Party on the sixth night of the Jewish festival. Around 30 people, Jews, Muslims, Christians and people of no faith from Greater Manchester and as far as Israel were treated to a varied and enjoyable programme.

Co-Chair Mohammed Amin welcomed the guests and ran the technology while Co-Chair Cllr Heather Fletcher was Master of Ceremonies.

The event was recorded and you can watch the speakers and performances below.

Executive Committee member David Berkley QC started the evening with a detailed explanation of the festival and the history behind it using both PowerPoint and his own menorah for demonstration purposes. The audience was fascinated to learn that the menorah in the official seal of the State of Israel is based on the carvings on the Arch of Titus in Rome, which represents the menorah that the Romans took away from the Jerusalem Temple when they destroyed it in 70 AD.

David recounted the miracle that took place after the small Jewish Maccabean army defeated the Greeks to liberate the Temple in Jerusalem and rededicate it to God. The Jews found only enough untainted oil for one day for the Temple’s menorah, but miraculously the oil burned for eight days, until fresh untainted oil could arrive.

That is why Chanukah menorahs have nine branches, (eight for the eight days and the central branch to hold the candle that lights the others), while the Temple menorah had seven branches.

The biggest cheers of the evening were reserved for the "toe tapping" klezmer music provided by the current and previous generations of the Michael Kahan Kapelye (The University of Manchester Klezmer ensemble). The group is named after the klezmer musician Michael Kahan who had wanted to create a student ensemble but was tragically murdered in 2011 before he could realise his dream.

Dr Richard Fay, a Senior Lecturer in Education (Intercultural Education) at the university (see his university page), co-founded the ensemble in 2012 with clarinettist Ros Hawley. Ros' role as Performance Lead is now taken by Daniel Mawson, himself a member of the 2nd generation of the ensemble. The ensemble, now with its 10th generation of students (from the Music Department), is an integral part of Manchester University's music scene.

The two videos presented at the party were curated performances recorded in isolation, a sign of our pandemic times. The first video - as played by last year's (9th) generation of the ensemble whose performance opportunities were cut by the pandemic - combined two pieces:

It is introduced by Heather Fletcher and Richard Fay.

As well as being compere for the evening, Heather Fletcher also gave a short cookery demonstration about making latkes (potato pancakes). Latkes are the traditional food of Chanukah alongside doughnuts, because both are fried in oil to commemorate the miracle of the oil in the Chanukah story.

Executive Committee member June Rosen reminisced about Chanukah when she was a child not long after World War 2. She mentioned that then it was a more private festival celebrated by families within the confines of their own homes. At that time very few non-Jewish people knew anything about Chanukah; now it is a much more public festival and people of many faiths are familiar with it.

Afzal Khan CBE MP, our Co-Founder, former Lord Mayor of Manchester, and currently MP for Manchester Gorton, recalled returning from holiday specifically to undertake his civic duty as Lord Mayor of lighting Manchester’s giant menorah in Albert Square. He was hoisted up by a crane; the menorah was so high!

Afzal has attended subsequent menorah lightings which are now at the Manchester Fort shopping centre. Afzal concluded by saying that Chanukah was now a festival for many to enjoy, one which strengthens community cohesion.

Broughton Councillor Charlie McIntyre, the current ceremonial Mayor of Salford explained that he had known nothing about Chanukah while growing up in Scotland.

However, after living in Broughton for many years he is now well acquainted with the festival. He was delighted to relate that each year (apart from 2020 due to the pandemic) his Orthodox Jewish neighbours invite him into their home during Chanukah to celebrate with them and to share in their traditional food. Cllr McIntyre is planning to learn more about Judaism via an online course next year

The evening finished with the second klezmer performance, as performed by the current (10th) generation of the Michael Kahan Kapelye. "Odessa Bulgar", sometimes called Odessa Bulgarish, is an upbeat klezmer tune often used in a set of tunes for a freylekhs or bulgar dance.

It was originally recorded in 1919 by the Abe Schwartz Orchestra. Abe Schwartz was born around 1881 near Bucharest, Romania and died in 1963 in New York. He was a well-known klezmer fiddler, composer, and bandleader active in the USA in the first half of the 20th century and his recordings significantly informed the klezmer revival of the 1970s - 1980s.

"The Chanukah party highlighted the late Chief Rabbi Lord Sacks’s reflections on the Chanukah lights: ‘we can all light them together and spread their eternal message of hope and joy’”.

"A most enjoyable virtual celebration of the festival of Chanukah with our Jewish friends near and far. We were informed about the history of Chanukah, learnt the recipe to make latkes and listened to some wonderful klezmer music by students from the University of Manchester."

"A night of music, history, food and celebration of the Jewish festival of Chanukah; to say it was fantastic would undersell the experience we all shared. I really enjoyed the toe tapping, body rocking performance of klezmer music."

The photograph below shows the speakers. Clockwise from the top left are: 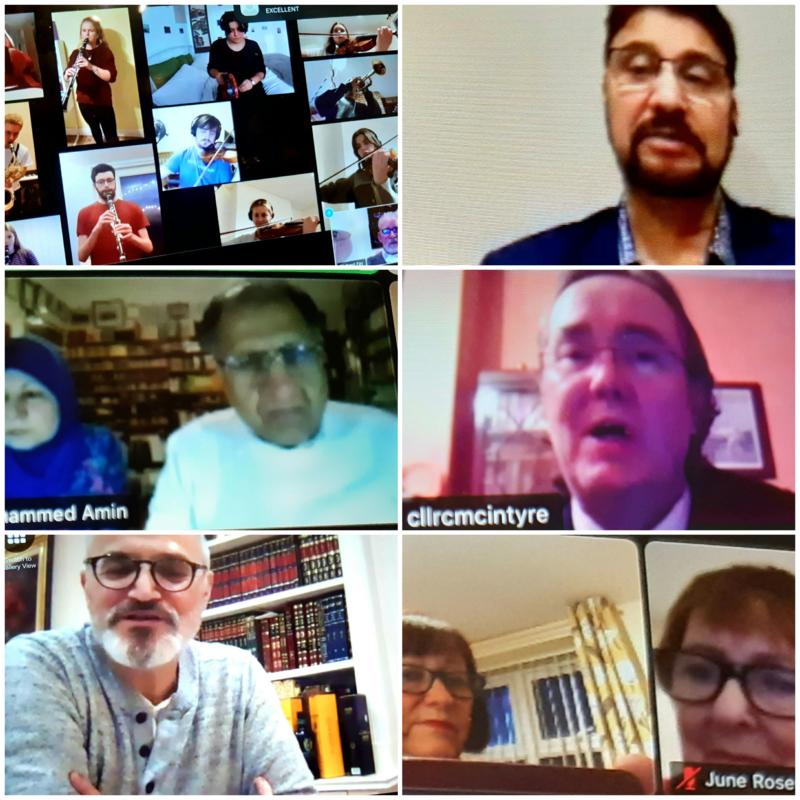 The second photograph is a larger image of the Michael Kahan Kapelye performing Odessa Bulgar. 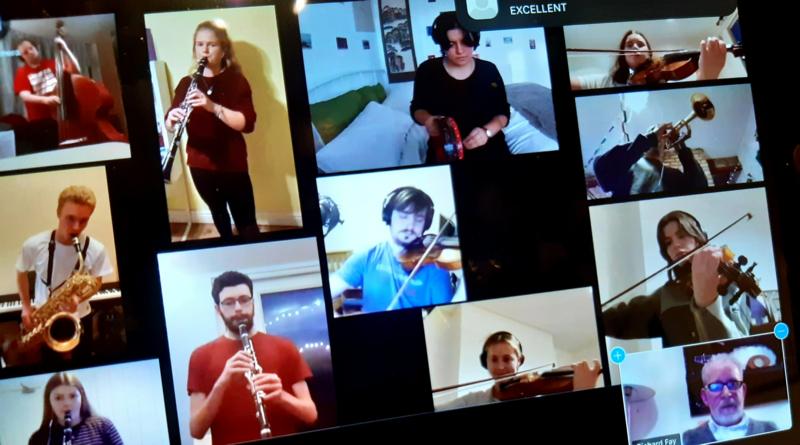