Our third "Big Concert" gets the Forum into Bollywood dancing

On Sunday 18 March 2018, the Forum held our third "Big Concert" at the Ukrainian Centre, Cheetham Hill.

Despite the freezing cold temperatures outside, almost one hundred people attended the event and were entertained by three very different groups of performers who reflected the cultural diversity of Greater Manchester.

Many of the audience participated in both singing and dancing. Co-Chair Mohammed Amin and Executive members Jackie Harrison and Seamus Martin joined in the Bollywood dancing lesson organised by the Sonaash Sisters. See the video below.

The guests of honour were the Salford’s Ceremonial Mayor, Cllr Peter Connor and the Forum’s co- founder Afzal Khan CBE MP. Both spoke about the need for communities to mix together and praised the Forum for its part in connecting Muslim and Jewish communities in Greater Manchester over the past 13 years.

Shabnam Hussain attended with all her family and said "We thought that the evening was amazing. We really enjoyed ourselves and it was so nice to see so many people of different faiths enjoying the night. We can't wait for the next event."

Judith Roberts stated “It was a really enjoyable evening with some diverse entertainment from talented performers. These events enable everyone to come together to celebrate that we are all different but also to recognise our similarities.”

Haley Bradley said “This was an enjoyable and entertaining evening encompassing a host of very talented people from the excellent Ukrainian dancers to the Bollywood dancers to Carol Jason and her band.”

The photograph below shows from left to right: 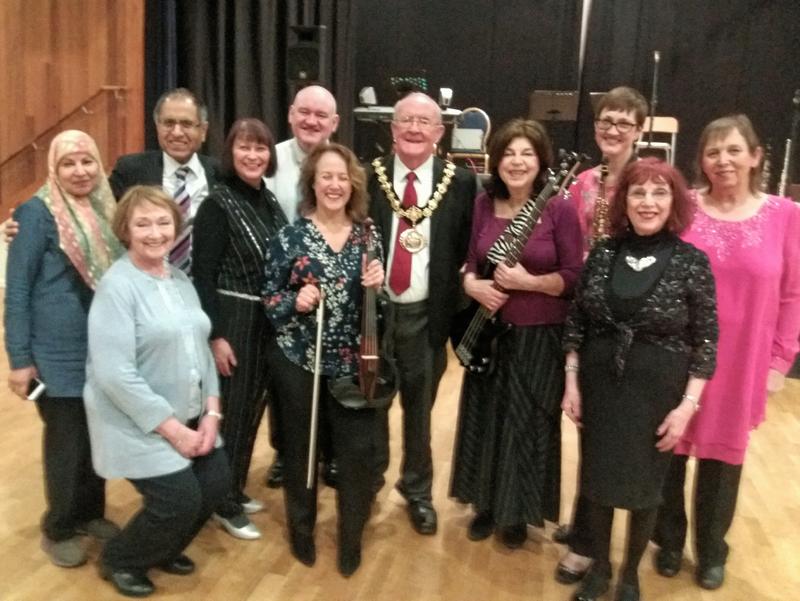