Our big concert draws in a capacity crowd

Over 100 people from all denominations packed into the Ukrainian Centre in Cheetham Hill on Saturday 9 November 2013 for "The Big Concert" organised by the MJF. Although the Forum was founded by Cllr Afzal Khan CBE and the late Henry Guterman MBE, almost nine years ago, this was the first time that we have put on a musical event of this nature and magnitude. In fact it was the biggest event we have ever put on!

The audience were warmly welcomed by Cllr Naeem Ul Hassan, the Lord Mayor of Manchester who is also a Councillor for Cheetham ward within which the concert was taking place. Thereafter the audience were treated to a musical extravaganza by the Nile Band who played Middle Eastern music and the Klezmer band, L'Chaim Kapelye who got the audience especially excited and even moved some of the ladies to dance traditional Jewish dancing! There was also a very talented performance from our Co-Chair Jonny Wineberg and his two daughters, Dania and Elisha.

Jonny Wineberg, Co-Chair said, “Special mention should go to Jackie Harrison and Jackie Lewis for pulling together such a wonderful event. This new venture adds to the growing list of diverse events run by the Forum, from football to business networking and women’s arts days to lawyers and accountants evenings. We are reaching hundreds of our co-religionists, building understanding, respect and friendships that are vital for community cohesion.”

We have a four minute video of L'Chaim Kapelye performing which you can watch below with the permission of the group.

Below we have a duet by Dania & Jonny Wineberg.

Dania, Elisha & Jonny Wineberg also came together as a trio to sing Yavo.

The picture below shows some of the audience who were captivated by the performance. 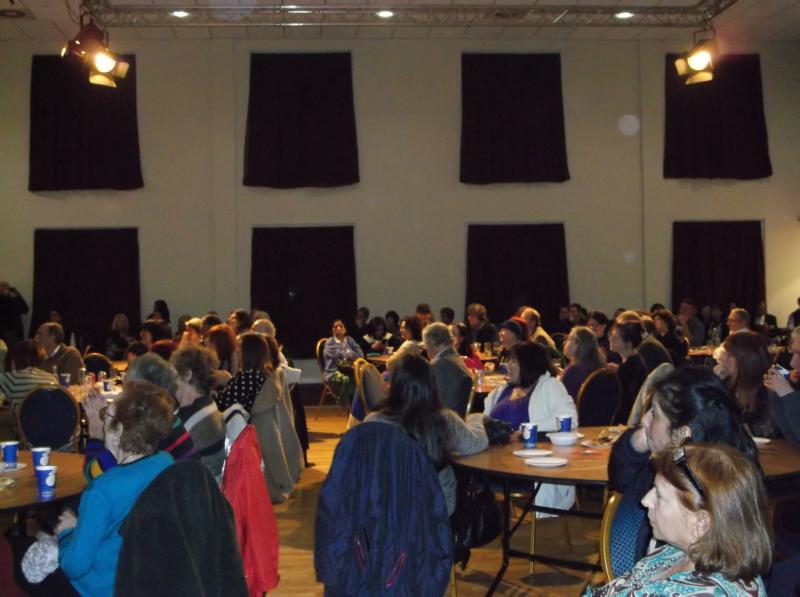