On Saturday 28 May 2016, we won the "Community Group of the Year" award at the 10th Annual Fusion Awards held in the prestigious King George’s Hall, Blackburn.

Our representatives were particularly delighted to win the award as the evening started with a disappointment. On arrival at the Fusion Awards evening, we were presented with a certificate saying that the Forum was “Highly Commended”; something that is normally given to entrants who have not won. Accordingly, all of us were astonished when the Forum’s name was read out as winners of the "Community Group of the Year" Award.

Mohammed Amin said "In almost eleven years, the Forum has built many bridges between Manchester’s Muslim and Jewish communities. In 2015 we led the UK by initiating a petition to Parliament to preserve kosher and halal slaughter which received over 100,000 signatures in only nine days. The award is wonderful recognition of our service to the community.”

Heather Fletcher stated "It is a massive honour to win this Fusion Award and for our work in bringing together the Muslim and Jewish communities in Greater Manchester to be acknowledged. The past eleven years have not been easy but we shall continue steering our organisation forwards so Muslim and Jewish friendships can become normalities and not exceptions."

Our winning entry is reproduced below the group photograph.

In the photograph below from left to right are: 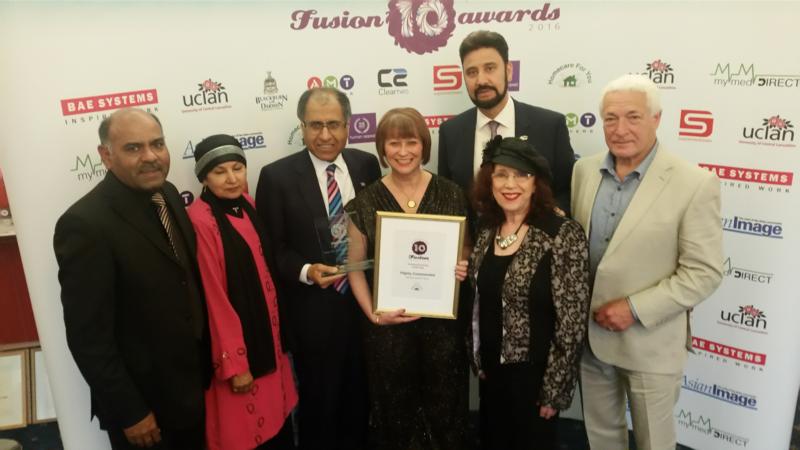 The entry we submitted is below. It was reproduced in the Fusion Awards brochure after minor stylistic amendments by the Award organisers.

Over the last decade we have run many events to bring Muslims and Jews closer together. The highlight of 2015 was our 10’th Anniversary Dinner, hosted by Manchester Town Hall with the UK’s Chief Rabbi and Shaykh Ibrahim Mogra as our keynote speakers.

As well as hosting events, members of our leadership appear regularly on local press, radio and TV, and sometimes in the national media, to spread the message that Jews and Muslims in Manchester cooperate. The Muslim Jewish Forum is also active on social media.

We were the initiators of the petition to Parliament in February 2015 in Mohammed Amin’s name to preserve the right to halal and kosher slaughter, which received over 100,000 signatures in just nine days.

Just one measure of our success is the growth in mosque / synagogue twinning and also in the twinning that is starting to happen between Muslim and Jewish schools. Since we began, more and more Muslims can be found attending Manchester Limmud and other events organised by the Jewish community, while Jews attend events organised by Muslims, for example to commemorate the Srebrenica genocide.

We have made a significant impact on community cohesion in Greater Manchester by making it normal for Muslims and Jews to cooperate and do things together for the benefit of both communities.

The Awards organisers also included in the Awards brochure mention of our November 2015 "Spread Hummus Not Hate" season of twinning event in Bury Town Hall, obviously as a result of visiting our website. They also stated that we were the only organisation in ten years to be shortlisted at two different Fusion Awards in two separate categories. They used the photograph below (from our Tenth Anniversary Dinner) in the brochure. 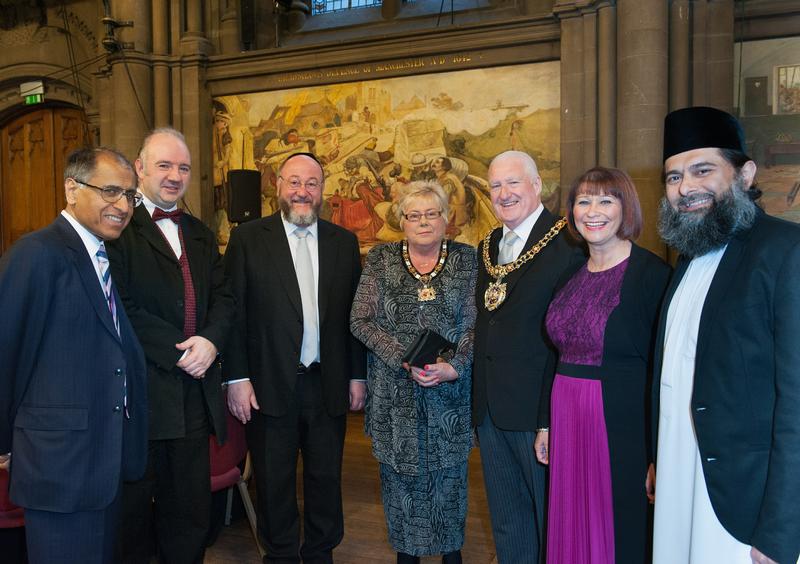