On Sunday 27 October 25 members visited the Holocaust Centre in Nottinghamshire. This was established in 1995 by the Smith brothers, who are Christians. They had been moved by their visit to Yad Vashem, the Jewish people’s living memorial to the Holocaust which is in Jerusalem.

The group were spellbound as they listened in silence for 90 minutes to Holocaust survivor, Steven Frank recount how his idyllic childhood turned from happiness to horror. He was born in Amsterdam in 1935 with his father a prominent lawyer and philanthropist. However when the Germans came and the Nuremburg Laws were enforced in Holland, at the age of seven he was no longer allowed to play in the local park, and had to change from a modern primary school to a decrepit school for Jews only. Then his father was taken away and subsequently murdered in Auschwitz.

His mother and her three young sons, including him, were sent to a transit camp at Barneveld and then to a much harsher camp in Westerbork. Each Tuesday trains would leave Westerbork clearly marked with destinations such as “Auschwitz” and “Sobibor.” Eventually the remaining family of four were sent to Theresienstadt, another concentration camp from which inmates were sent on to the death camps if they were not killed in Theresienstadt. Sanitary conditions were appalling and everyone was constantly hungry. Bravely his mother sought work in the germ infested camp hospital, which gave her access to hot water. That enabled her to occasionally wash her sons and their clothing to reduce the risk of the infections which killed so many.

The audience was in tears as Mr Frank described the total commitment of a mother to her children. She was sometimes able to feed her sons with scavenged fragments of bread and biscuits mixed in hot water while other equally hungry children had to look on. His mother and her sons survived until the camp was liberated. As she was British born, she was able to persuade some airmen to fly them to the UK where the family made a new life.

The most shocking statistic was that out of 15,000 children sent to Theresienstadt, only 93 survived. 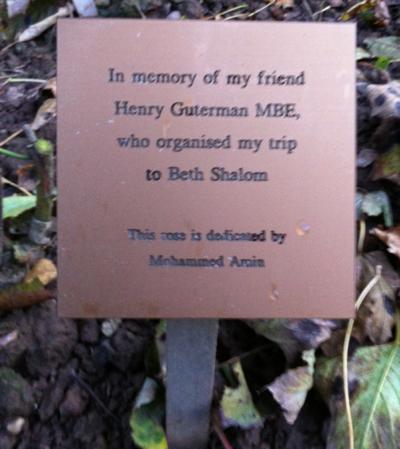 The Holocaust Centre has a memorial rose garden, and the group saw a rose which the current Co-Chair Mohammed Amin had dedicated in 2007 to the late to Henry Guterman MBE (Co-Founder of the Forum). Mr Guterman had organised a 2007 trip for the Forum to the Holocaust Centre, but had died before that trip could take place, and Mr Amin had memorialised that in his dedication.

The group were also escorted round the excellent Kindertransport exhibition which is designed to tell primary school children about how some Jewish children were given sanctuary in Britain but had to leave their parents behind.

Heather Fletcher, Secretary of the Forum stated "I thought that Mr Frank's account was mesmerising and it was a miracle that he survived all this as such a small boy. The Holocaust Centre is a place everyone must visit as not only does it show you the horrors of the past but it also puts your own life into perspective"

Mohammed Amin stated "A statistic like six million murdered just for being Jewish is almost impossible for the mind to take in. Listening to a survivor helps you to understand that these were six million individual human beings, with loving families, hopes and dreams, all snuffed out for a racial ideology.”

The visitors to the Holocaust Centre are pictured below holding a cloth from which the yellow stars that Jews had to wear would be cut out. Mr Frank is a modest man and is standing almost hidden near the back. Accordingly he has been indicated on the picture. 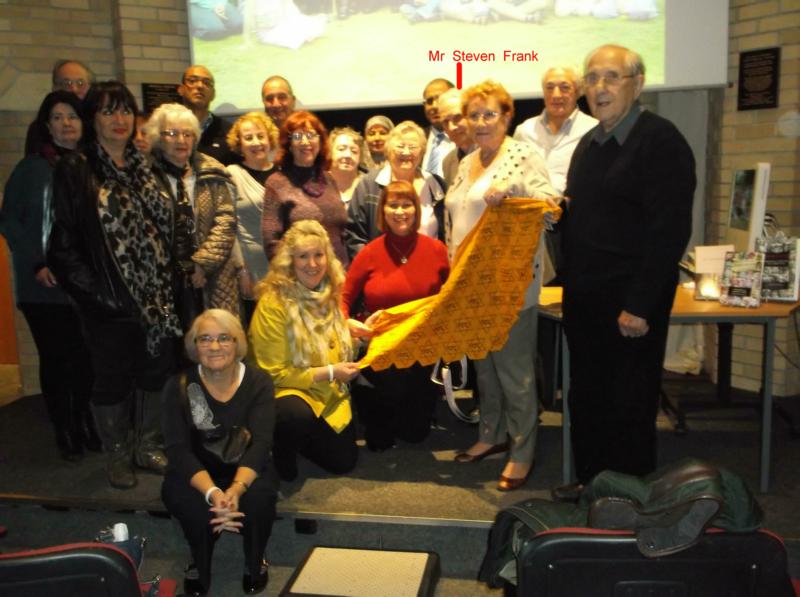 The 27 January 2017 issue of "The Jewish Chronicle" had extensive coverage of Holocaust Memorial Day. As part of their special feature, they had an article about a project to record the testimony of Holocaust Survivors in such a way that the 3D projected recordings can answer questions.

The article "You are looking at the future of Shoah education" is linked, and should be accessible even to non-susbscribers.

The first person recorded in this manner is Steven Frank, who spoke to us during our visit.