On Sunday 26 June, we organised our annual iftar jointly with Faith Network 4 Manchester (FN4M). An iftar is the meal held at the end of a day of fasting during the Muslim holy month of Ramadan.

This time the event was kindly hosted by Cheadle Mosque & Community Centre. It was also supported by Greater Manchester Police as part of the #WeStandTogether initiative.

Over a hundred people from many faith backgrounds attended the event, with very strong representation from the congregation of Yeshurun Synagogue in Cheadle.

The audience was warmly welcomed by Rev Bob Day (Chair of FN4M), Councillor Heather Fletcher (Co-Chair of MJF) and Arshad Sheikh (Administrator of Cheadle Mosque). Mr Sheikh gave a clear and informative presentation with PowerPoint slides about the history of the mosque, its activities with the wider Cheadle community, the Islamic calendar, and the way that Muslims fast during daylight hours for the month of Ramadan.

Speakers from other faiths talked about whether their religious tradition includes fasting, and if so how it is practiced:

The event was well supported by civic representatives, including Cheadle MP Mary Robinson. Short speeches on the need for unity and praising the strength Manchester gains from diversity were given by:

Votes of thanks were given by Qaisra Shahraz (Vice Chair of FN4M and member of the MJF Executive), Mohammed Amin MBE (Co-Chair of the MJF) and Ms Bader Akhter of Cheadle Mosque.

All the guests broke their fasts on dates and water in the traditional way and were then treated to halal Moroccan or kosher meals. There was a warm and friendly atmosphere throughout the evening.

“Tonight was a meaningful expression of tolerance. We all believe in different religions; have our own set of dogma or lack thereof; some of our convictions do contradict each other's. Yet despite all that, our humanity, civility and shared values unite us in our call for tolerance and cooperation. I thank Cheadle Mosque and its leaders from the bottom of my heart for their welcoming and gracious hospitality. May this beautiful evening serve as an example for good interfaith relations.”

“I am here at the Cheadle Mosque for the multifaith event. This is a great event bringing together people from many different traditions. It is important that we do learn from each other because, frankly, as communities we are stronger when we recognise each other and we stand together.”

“The event here at Cheadle Mosque this evening is really important. It helps communities to understand the differences that we all have and therefore to overcome intolerance and to prevent hate. I think it is really important that individually and collectively we all take away the learning from tonight and share that with friends and families. This has been a lovely evening where people have been so welcoming to me and particularly the people here at Cheadle Mosque have been so energetic and enthusiastic about telling us about the great work that they do here in the community.”

“I think this is a fantastic way to celebrate Ramadan here with all the different faiths together. We are working with the Muslim and Jewish communities. It is important to remember all the different faith organisations that are out there. Tonight shows that we have got various people here all celebrating, talking together and mixing with each other.”

“I think it is one of the best interfaith gatherings that I have seen. The camaraderie and the mixing is amazing and in a holy place like a mosque is fantastic.”

“I thought it was fabulous that we could learn about different religious fasting traditions. The event brought us all together to deepen our understanding of each other. Our hearts are connected even though we pray differently. Fundamentally, we are all the same; as Buddhists we respect other beliefs, because all people want to live in peace and harmony together."

“It was a pleasure to welcome Faith Network 4 Manchester and the Muslim Jewish Forum to our mosque and this evening fulfilled the true nature of a mosque as a community centre. People of all faiths and backgrounds joined together to break the fast communally; there was a real sense of community spirit and cohesion. We learnt so much from each other about fasting in each religion and that we have so much in common spiritually and humanely. The more we learn about each other the more relaxed we can be in each other’s company. We wish to say a special thanks to Yeshurun Synagogue and Rabbi Chanan Atlas for a fantastic turnout and look forward to the next interfaith event.” 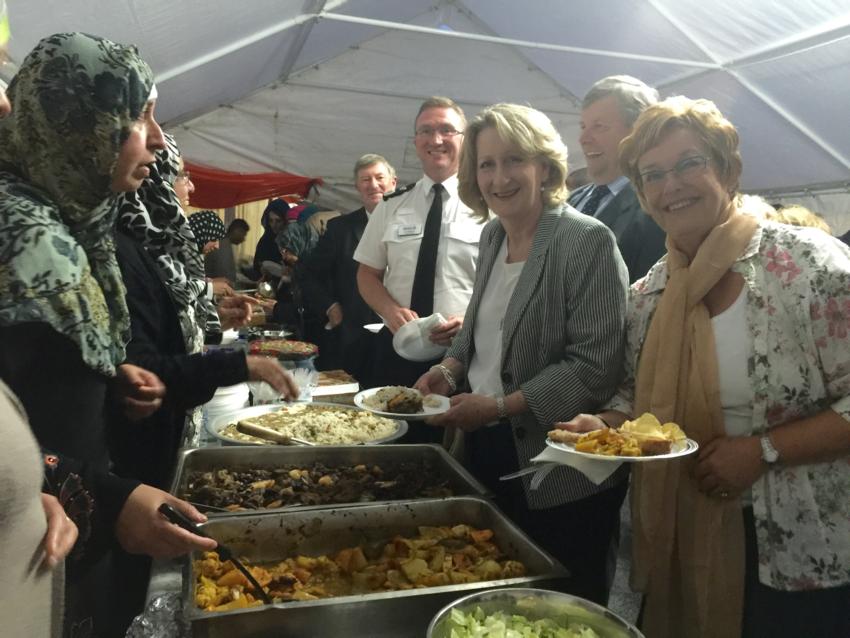 The photograph below has the Lord Mayor Cllr Carl Austin-Behan holding the #WeStandTogether banner. To the Lord Mayor’s left is Hani Singh, who came dressed in full Sikh regalia complete with swords for the benefit of the audience. To Hani Singh’s left is Mohammed Amin and to his left Qaisra Shahraz. 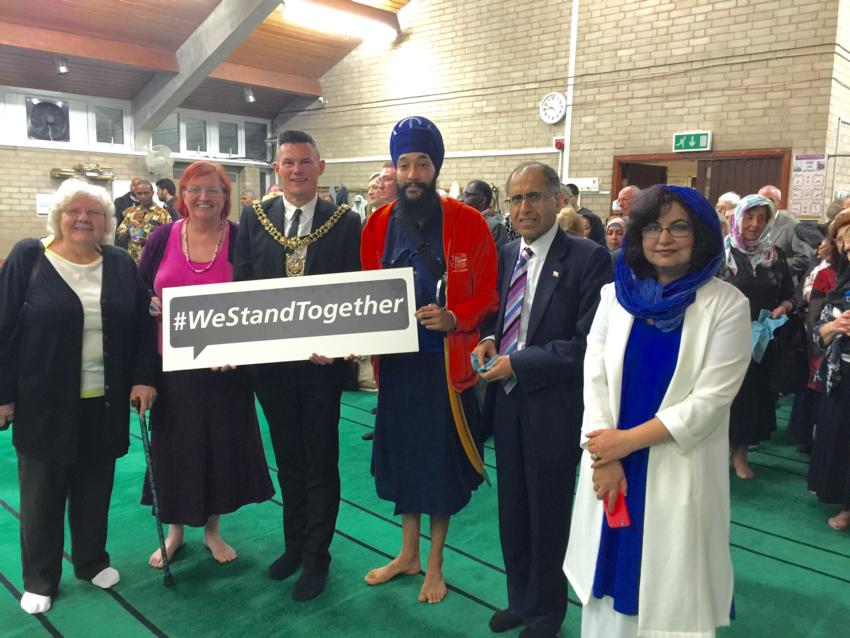 Below is a group photo of just a few of the 100+ people who attended. 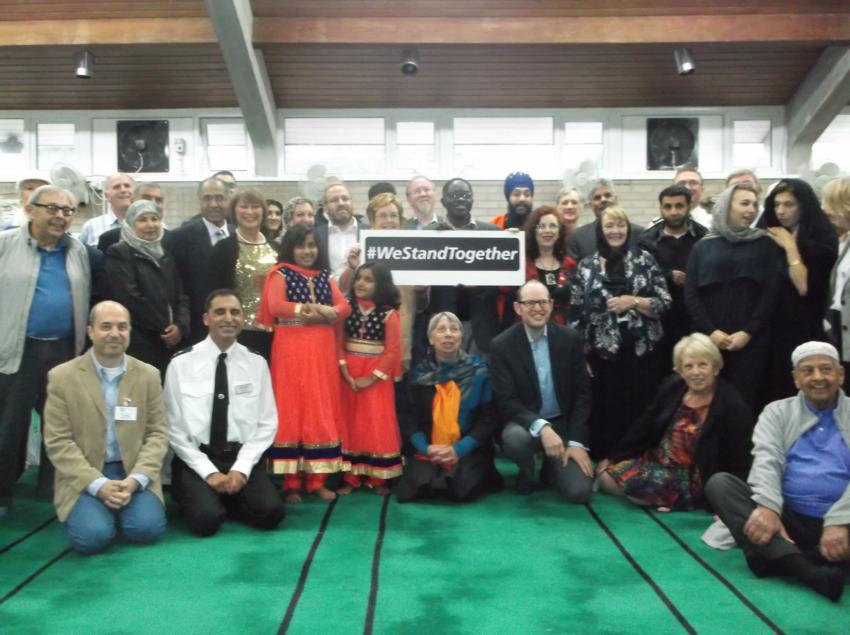 On behalf of Yeshurun Hebrew Congregation in Cheadle Gatley, I would like to thank you for organising and inviting us to the 'We Stand Together' event at the Cheadle Mosque.

We all thoroughly enjoyed the occasion, found it informative, engaging, welcoming and inclusive.

Understanding the elements of the Mosque and observing the evening prayers was a privilege.

Breaking the fast with the traditional dates and water, followed by the evening meal was a real treat and an opportunity to mingle and get to know each other better.

As you may know, we too host interfaith events in our synagogue, we look forward to meeting again there and in similar events elsewhere.

Please convey our extended thanks to all those involved in organising the event.