We organised our annual Iftar, the Muslim meal after a day of fasting during the month of Ramadan, on Sunday 27th May

There was a very impressive line-up of speakers:

The other Forum Co-Chair, Cllr Heather Fletcher was Master of Ceremonies for the evening and Forum Executive member, June Rosen, gave the vote of thanks

In this difficult week following the first Anniversary of the Manchester Arena terrorist attack, all of the speakers shared their perspectives about the need for unity. Each welcomed the rich tapestry and diversity of people who had made Manchester their home over the last couple of centuries.

The Dean stressed the need for all people to work "side by side" to achieve things together, illustrating this with a story about Shimon Peres and King Hussein of Jordan taken from Lord Sacks’s book “The Dignity of Difference”.

Mohammed Amin mentioned how Muslims and Jews had worked together in London in the successful judicial review application against senior north London coroner Mary Hassell regarding the need for early burial in both faiths.

Cllr Fletcher recounted how Muslims and Jews in Europe had helped each other for many years. For example, Albanian Muslims had saved Jews in World War 2 and Jews had saved Muslims in Sarajevo during the Bosnian War

Within her vote of thanks, June Rosen shared a personal observation:

The event was attended by over 60 people of all faiths and none. Several Salford City Councillors attended and also Chief Inspector Umer Khan.

"Meaningful inter-communal engagement is a pressing need of our time. This event, splendidly organised by MJF and very kindly hosted by Khizra Mosque, is an excellent example of this. Meeting so many people from different religions and ethnic backgrounds and having the opportunity to remind ourselves of all we share is a very commendable outcome.”

"I felt honoured and blessed as the daughter of a Catholic mother and a Jewish father to be sitting with many Muslim people. I believe that now more than ever we need to open our hearts to each other, share occasions like this Iftar meal, and work side by side towards recognising that people of all faiths and communities are basically just like each other.”

The group photo below was taken outdoors in the Peace Garden outside the Mosque, which has a plaque commemorating the victims of the Manchester Arena Bombing.

The interior group photo below contains many of the speakers. Seated from left to right:

Rabbi Dr Reuven Silverman of Manchester Reform Synagogue (speaker) is standing at the left of the photograph wearing suit and tie. 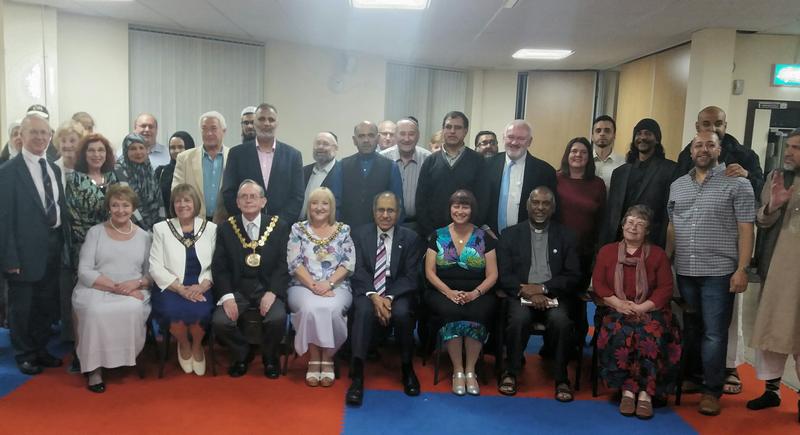