On the evening of Sunday 8 December, we organised a festive party. It was hosted by Faith Network 4 Manchester (FN4M) at the Multifaith Centre in Manchester. Rev Bob Day (Chair of FN4M) and Mohammed Amin (Co-Chair of the MJF) welcomed nearly fifty people of the Muslim, Jewish and Christian faiths and some Humanists. The guests enjoyed a delicious kosher buffet and a very tasty Asian buffet with the seasonal treat of kosher mince pies!

The atmosphere was lively throughout with people meeting new friends and conversing with people of different faiths. However, the highlight of the evening was the entertainment. This included MJF Co-Chair Jonny Wineberg and Jackie Harrison singing catchy Jewish songs, MJF Secretary Heather Fletcher reading her poems about Jewish food and Indian curries and Qaisra Shahraz reading from her latest acclaimed novel "Revolt". Shahid Saleem explained and performed the Islamic call to prayer and Rabbi Arnold Saunders supplied light relief with his stand-up comedy routine and side splitting jokes. There was also dancing led by Jackie Harrison.

Newcomer Rabina Mohammed said "This was only the second Forum event I have been to, and I came because I enjoyed the concert last month. I bought some of my friends with me and we enjoyed the relaxed informal atmosphere and meeting some nice new people"

Heather Fletcher, the MJF Company Secretary stated "We have had many informal parties in the past eight years but I enjoyed this one even more because of the varied entertainment. I conclude that our communities really do have some talent and Rabbi Saunders could be the next Jackie Mason!"

Alison Kudlowski described the event as "a joyous, entertaining and inclusive evening."

Photographed below are Jackie Harrison (right) and Alison Kudlowski (left) dancing. Rev Bob Day is seated at the left of the picture. 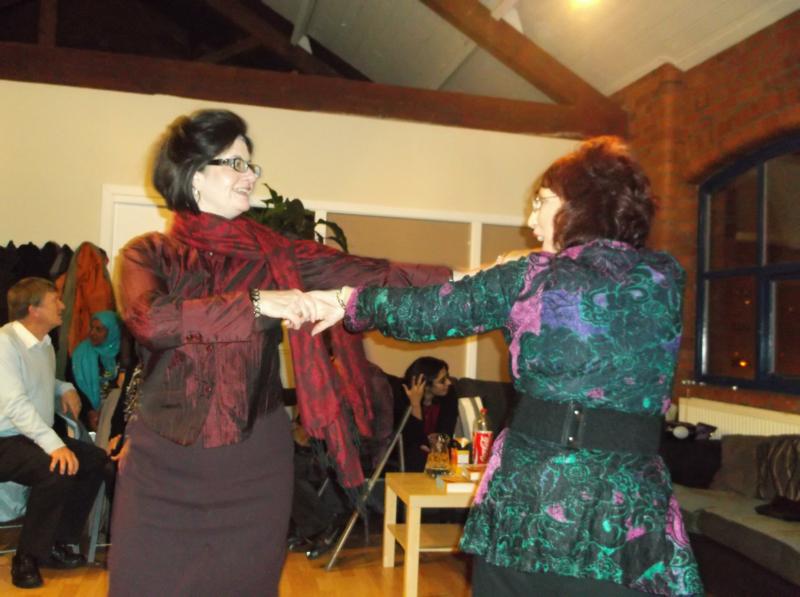