The results ceremony for the Jewish Community Awards 2014 was held on 11 March 2014.

Our contribution to building links between communities in the county was recognised. We received a "Highly Commended" certificate as runners up to the Manchester Jewish Museum in the "Building Bridges" category. The Awards, organised by the Jewish Representative Council of Greater Manchester & Region with support from the Jewish Telegraph and Jewish Volunteering Network, took place at a packed Longfield Suite in Prestwich.

The nomination for the award came from His Honour Judge Charles Bloom QC, who said, "It has been a constant goal of the Muslim Jewish Forum to engender greater understanding of the cultures, the rich heritage, the religious precepts and customs of these two communities in the Greater Manchester area. In order to do so the organisation has arranged and promoted many activities to be shared by members of the two faiths and communities, the main focus of which has been social, educational and recreational. The emphasis is on what the two faiths and their members share in common and, whilst acknowledging differences, accepting that there is more than one acceptable and appropriate way to participate in faith observance and way of life."

The Award for the Forum follows other recent recognition with The Lord Mayor of Manchester’s special commendation certificate for services to the community and winning "The Spirit of Britain" category at January's National British Muslim Awards.

There were further accolades as the Forum's Co-Founder Cllr Afzal Khan CBE, who had been nominated by Forum Secretary Heather Fletcher, was the runner up in the Friend of the Community Award, receiving the "Highly Commended" certificate. Also Jackie Harrison, a member of the Forum’s Executive, was Commended in the Volunteer of the Year Award.

Co-Chair Jonny Wineberg said, "The recognition of our work is always appreciated but it is the improving of understanding, relationships and respect between our two faiths that is the real reward. With both Jews and Muslims facing threats in Europe such as attempts to ban religious slaughter and circumcision, it has never been more important for us to stand together as cousins. Our work has given us the foundation to act together and we hope that many more people will join us in our endeavours."

Councillor Afzal Khan stated "I was delighted and honoured to be awarded a "Highly Commended" certificate in the category "Friend of the Community" for the second year running. I am equally delighted that our Muslim Jewish Forum also received recognition. This highlights the important work that we do in connecting communities and the need for us all to try and unite in our global village.”

In the photograph below from left to right are: 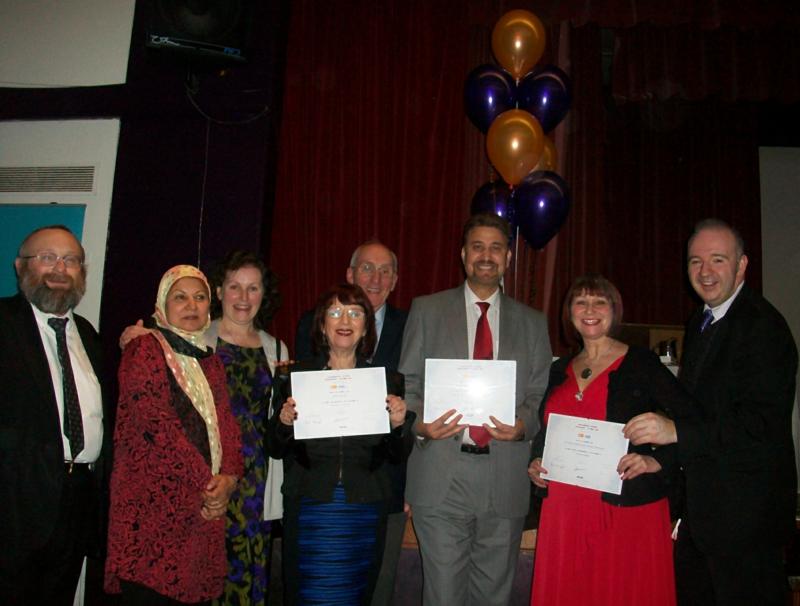