On Sunday 26 June, 13 Forum members visited Leeds to meet with members of the Muslim and Jewish communities there.

While Leeds is a relatively short drive from Manchester along the M62, the Pennines can be a high psychological barrier! Accordingly, the trip had two equally important goals:

Our group visited three locations, and in each of them met with both Leeds Muslims and Leeds Jews.

First was Makkah Mosque Leeds, which is in walking distance of Woodhouse Moor and Leeds University. The mosque’s Imam, Qari Asim MBE, has a national reputation as Chair of the Mosques and Imams National Advisory Board, and is frequently interviewed on TV. He is also practicing solicitor, and has known Co-Chair Mohammed Amin for many years.

Imam Qari Asim explained the history of the mosque and how it works with the Jewish and other religious communities in Leeds, as well as people of no faith, on pressing social issues. The visitors were also able to tour the mosque, and admire the wonderful Arabic calligraphy on the inside of the mosque’s dome.

The image below is a panoramic photo going round the whole dome taken by Mohammed Amin. Click it for a high resolution image.

The group then had a fully kosher lunch in the Marjorie & Arnold Ziff Community Centre, where they could talk informally with Leeds Jews and Muslims. The Centre is the hub of the Leeds Jewish community, housing the offices of various communal organisations, as well as hosting events and activities for the community.

The third destination was the United Hebrew Congregation which is an independent orthodox synagogue operating under the auspices of the Chief Rabbi of the British Commonwealth. It was built in 1986 to amalgamate several previous synagogues, retaining many features such as beautiful stained-glass windows from the previous buildings.

The visitors were given an illuminating talk by Alan Benstock who regularly hosts school visits at the synagogue, including a close look at the Torah scrolls.

The Forum’s Co-Chair Cllr Heather Fletcher led the tour group to ensure everything ran to schedule.

Planning is already underway for a return visit to Manchester in 2023 to continue building the trans-Pennine relationship.

“This was an inspirational day of education and honest reflections and insights on Muslim-Jewish relations. Both communities recognised the important part that this bilateral dialogue within the wider framework of multi-faith relations.”

“The communities in both cities can learn from each other. In particular, the trip confirmed for me the design features that have helped the Muslim Jewish Forum to succeed, especially having an organised legal structure and good website.”

The photograph below was take at United Hebrew Congregation. It shows the group in front of the synagogue’s ark where the Torah scrolls are stored behind the blue curtain. Alan Benstock is at the far left of the photograph wearing glasses. 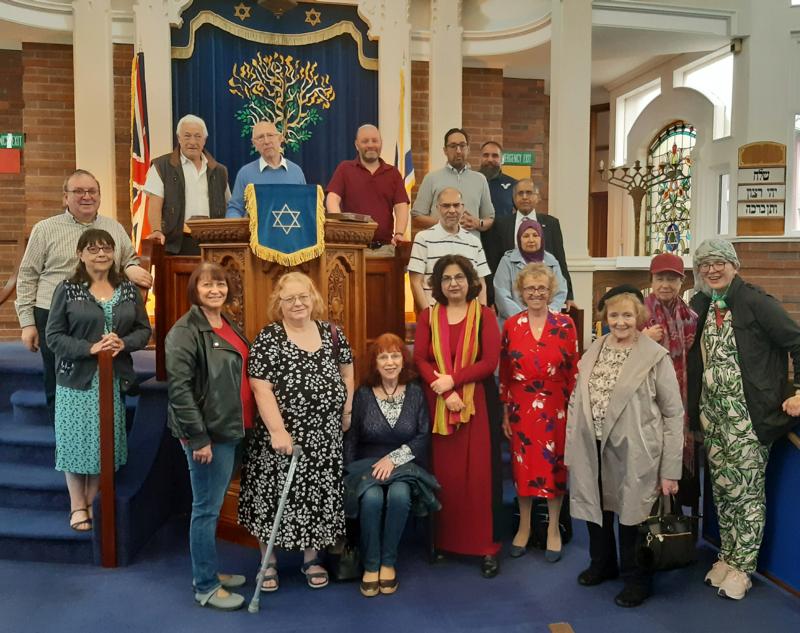 The photograph below was taken in Makkah Mosque. It shows Imam Qari Asim standing in the centre wearing a cap. Mohammed Amin is seated in front of him. Heather Fletcher is next but one to his left, wearing a leather jacket. Simon Phillips is at Imam Asim’s far left, wearing a purple top and khaki trousers.