On Sunday 6 October, 16 members of the Forum travelled to Lincoln to learn about the city’s Jewish community past and present.

After lunching together at Pimento, a vegetarian cafe, the group received a guided tour of Lincoln Cathedral.

Their guide, Dorothy Moss, explained how during the 11’th and 12’th centuries Lincoln was very prosperous through the wool trade. The Jewish community played a large part in the city's development in their role as moneylenders and also helped finance the building of the Cathedral. Jews were regarded as the property of the king, and were only allowed to be moneylenders, doctors or cleaners in medieval Lincoln. They also had to wear distinctive yellow badges in the shape of tablets of stone so they could be recognised.

St Hugh of Lincoln was the Bishop in the late 12th century and he staunchly defended the city's Jews against persecution.

The guide showed the group the shrine to Little St Hugh in the Cathedral. Hugh was a young boy who was found murdered and in 1255 the Jews were falsely accused of killing him in a ritual murder. This was one of the first known "blood libel" cases. The group were dismayed to learn that although the “blood libel” slur has long been prevalent in European countries, it originated in England.

Considerable persecution of Lincoln Jews followed and subsequently all Jews were expelled from the UK in 1290.

Thereafter the Forum group proceeded to Jews Court. This house is believed to be have been built on the site of a medieval Synagogue.

Two Jewish people became betrothed at Jews Court in 1992 having noticed the building whilst on holiday. Shortly afterwards, Jewish life was resurrected in Lincoln at Jews Court. One of the founder members of the Lincoln Liberal Jewish congregation, local Jewish solicitor Richard Dale, addressed the group.

He explained that there were now 30 members of the synagogue and that sabbath services took place in Jews Court on a fortnightly basis. Around 40 people had just attended for the Jewish New Year service and an "after the fast" meal was planned after the impending Yom Kippur fast. Study groups were held there too.

Mr Dale commented how the Forum's visit to Lincoln had inspired him to start interfaith dialogue with local Muslim and Christian leaders with a view to establishing an interfaith group in Lincoln.

Alderman Nilofar Siddiqi, who is Muslim, stated "This trip has definitely improved relationships between Muslims, Jews and Christians. It was great to spend the day together in Lincoln and it was truly educational. It was so interesting to learn about the Jewish community in Lincoln in the middle ages."

Ruth Collins, who is Jewish, said "A very well organised and fascinating trip to historic Lincoln. In addition to seeing the medieval buildings I enjoyed meeting members from the local Lincoln Jewish community. It is poignant to know that the probable old site of the medieval synagogue has been revived as a synagogue today. It was lovely to meet so many friendly people of all faiths on the trip."

Councillor David Wilson, who is Christian, stated "Hearing the speakers talk about interfaith co-operation in Lincoln today gave me hope that religious tolerance and respect are virtues that are being practised and not just preached. Thanks to the organisers for arranging such an interesting day. It was also pleasant to meet other Mancunians of different faiths from the Muslim Jewish Forum."

The group photo below was taken in Jews Court. 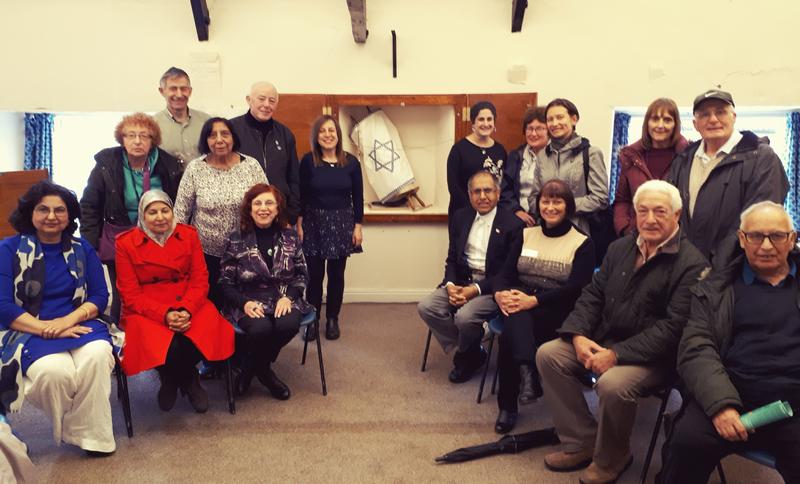