On Thursday 23 May 2013, 60 members of the Muslim Jewish Forum of Greater Manchester packed into the conference suite of Linder Myers Solicitors. They came to listen to the views of a panel of four very eminent lawyers. The panel and the attendees were welcomed by the Co-Founder of the Muslim Jewish Forum, Cllr Afzal Khan CBE, former Lord Mayor of Manchester and also a solicitor.

The panel consisted of His Honour Judge Charles Bloom QC, David Berkley QC, Mukhtar Hussain QC and solicitor Emma Nawaz. The meeting was chaired by Heather Fletcher who is the Secretary of the Muslim Jewish Forum and also a solicitor.

They discussed the question "Does the panel think that the English legal system would benefit by the incorporation of some religious laws?" After their presentations, they also took questions and comments on this topic from the audience.

Brief extracts from their comments are below:

HH Judge Charles Bloom QC said “In an ideal world, I would have the Biblical precepts relating to human relationships and moral values, and there are many of them, enshrined in a statute. It would be called “The Human Respect and Family Values Act.””

Mukhtar Hussain QC said “During the Empire, in British India separate laws governed marriage, divorce and inheritance (personal law) for Muslims and Hindus. A similar approach could be taken under English law now for the same personal law matters.”

David Berkley QC said “Religious law is a matter of personal conscience and should not be enforced by the state. Let Rabbis and Imams provide their moral compasses, but not as makers of enforceable laws.”

Emma Nawaz said “UK law has already been amended for religious needs. For example the Road Traffic Act was amended to allow Sikh motor cyclists to not wear safety helmets due to their wearing turbans.”

After the presentations and discussions, MJF Executive Member Sarah Kemp gave a vote of thanks. The attendees were treated to a plentiful kosher buffet provided by the sponsoring hosts, Linder Myers Solicitors. There was considerable networking and a convivial atmosphere amongst the speakers and attendees.

In the photograph below from left to right: 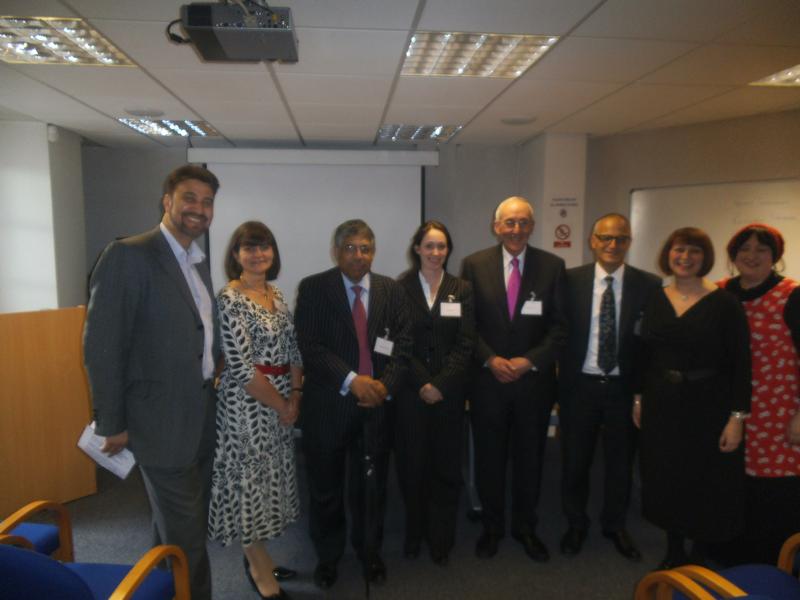