On 26 October 2017, we held our 10th lawyers' panel event. This year it was hosted by Khizra Mosque in Cheetham Hill. There were approximately 50 attendees, including many attending for the first time. The question put to the panel was "What are the rights and wrongs of the Prevent Strategy in stopping people from being drawn into terrorism?"

The panel had two Jewish barristers, David Berkley QC and Jeremy Dable; and two Muslim lawyers, barrister Ahmed Nadim and solicitor Nasir Hafezi. The panel was chaired by Forum Co-Chair Councillor Heather Fletcher who is a solicitor. All four lawyers gave thought provoking presentations from many different angles which were followed by a lively question and answer session.

Nasir Hafezi who specialises in terrorism law said: "I have about 50 recommendations regarding the operation of Prevent. One of them is that the current Prevent Strategy, the operation of Channel, the use of Section 26 [Counter-Terrorism and Security Act 2015] terrorism duty, restriction of speakers and the counter terrorism local profiles should all be subject to review by likes of someone with the standing of Max Hill QC, the respected Independent reviewer of terrorism legislation"

Jeremy Dable stated: "Prevent is a strategy of intelligence and hearts and minds. The reality is that nursery school carers give up their time to be trained how to tell if one of their 3-year olds might be a terrorist. And for this they have to pay?"

Ahmed Nadim stated "Prevent is a tarnished brand in the Muslim community." He also stated that due to apathy many Muslims had not engaged sufficiently in the making of policies and furthermore did not participate enough in civic life. He noted that on the many occasions he has sat as a part time judge very few Asian people appeared on the jury.

David Berkley stated: "The aims and objectives of Prevent were well intended" and that we should not "decry the motives of those who wish to develop a strategy." He also remarked that despite our anxieties we still live in a relatively peaceful time

Before the panel started, Afzal Khan MP, was presented with a celebration cake from the Forum for being elected as the MP for Gorton earlier this year. Afzal Khan co-founded the Forum 12 years ago with the late Henry Guterman. Afzal stated, "It was wonderful to listen to such a topical and engaging debate. All four panellists put forward thought provoking and well thought out points and they were debated with great rigour and intellect. Well done to all involved.”

A vote of thanks was given by former Co-Chair Jonny Wineberg. Sajjad Amin of Khizra Mosque then discussed the Mosque's extensive outreach work. The attendees enjoyed a variety of kosher cakes in a warm, friendly atmosphere.

In the picture below, from left to right: 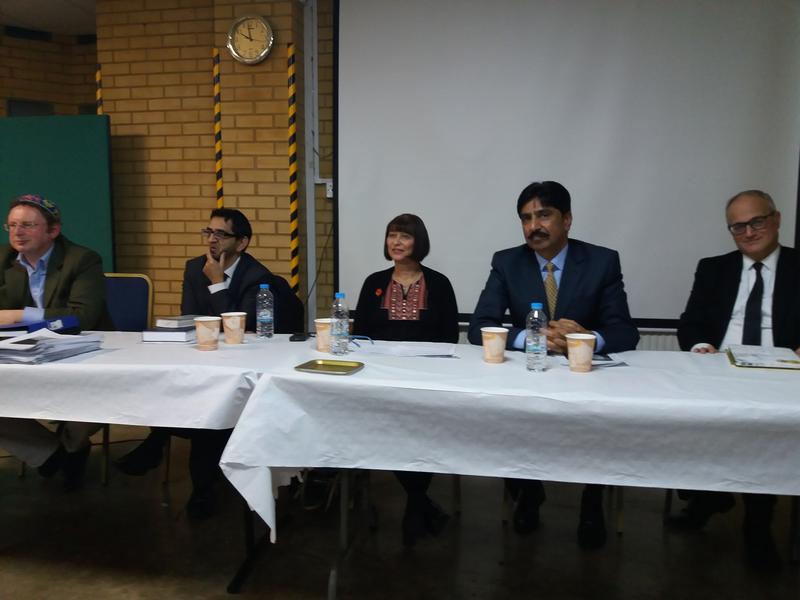