"Should the Government have the power to take away my citizenship?" Our Loose Lawyers panel responds.

The cancellation of the British citizenship of people like Shamima Begum who left the UK at the age of 15 to become an “ISIS jihadi bride” has made this a very topical question.

Accordingly, Forum made it the question for our annual “Loose Lawyers” panel event, when two Jewish and two Muslim lawyers respond to the question before taking questions from the audience.

The panel was chaired by the Forum’s Co-Chair Cllr Heather Fletcher who is herself a solicitor. It was formally opened by the Lord Mayor of Manchester, Cllr Abid Latif Chohan, who is also a solicitor.

The venue was Khizra Mosque on Cheetham Hill Road, Manchester, and the audience was welcomed on behalf of the mosque by Sajjad Amin, who is also a solicitor!

The vote of thanks at the end was given by the Forum’s Co-Founder, Afzal Khan CBE MP, who is also a solicitor!

The event formed part of the Global Season of Twinning organised by the Foundation for Ethnic Understanding of which the Muslim Jewish Forum is a partner.

About 40 people attended. Among first time attenders were people born in Africa and France, demonstrating how the Forum is reaching out to more people in Greater Manchester with a wider spread of origins.

The Forum’s key goal is to bring people together, especially Muslims and Jews. After the proceedings closed, there was about an hour of informal mingling over fruit juices, tea coffee and kosher cakes.

Forum Co-Chair Mohammed Amin witnessed many informal conversations such as:

In the group photo below from left to right are: 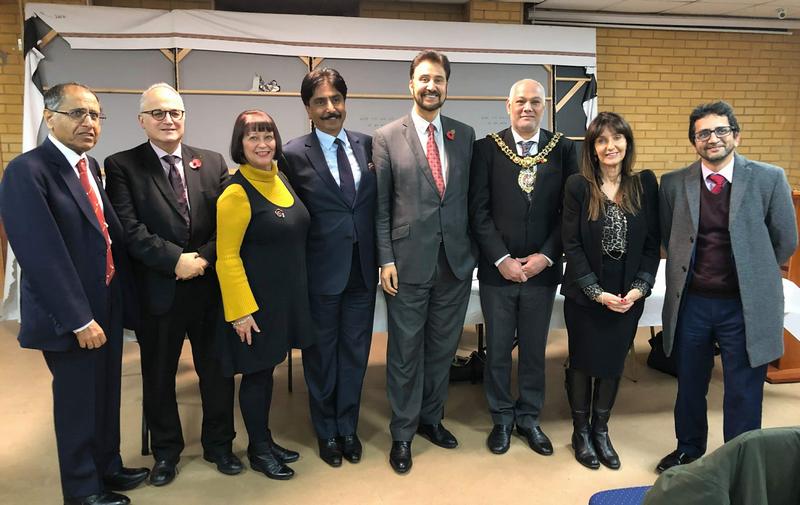