The organisation “Shalom Paix Salam!” (the word “peace” in Hebrew, French and Arabic) exists to promote harmony between French Jews and Muslims. In June 2012 three members of Shalom Paix Salam! visited the Muslim Jewish Forum of Greater Manchester. On 21 - 24 March 2014 seven Muslims and Jews from Manchester had a return visit to Paris at their own expense.

The long weekend enabled the Mancunians to gain a much better understanding of Muslim Jewish relations in Paris, visit important landmarks and also do some sightseeing and shopping!

On Friday evening the group attended a synagogue for the traditional service to mark the commencement of the Sabbath, followed by a Sabbath meal. The location was the Beth Yaacov Synagogue, which is part of the Alliance Pour un Judaïsme Traditionnel et Moderne (French for Reform Judaism). Mohammed Amin, the Muslim co-chair of the Forum explained to the French audience how the forum was set up with the Rabbi of Beth Yaacov Synagogue, Gabriel Farhi, providing French translation. Rabbi Gabriel Farhi is a graduate of Leo Baeck College in London.

On Saturday the group visited the Grande Mosquée de Paris. This beautiful landmark building was constructed in 1926 with the assistance of the French government to recognise the sacrifice of over 100,000 Muslims who had died fighting for France in World War I and was opened by the President of France Gaston Doumergue.

That evening the group was hosted by the Jewish co-chair of Shalom Paix Salam! Corine Goldberger, alongside the Muslim co-chair Zouzou Berezel for an informal dinner party. This provided the opportunity for more informal socialising between the Mancunians and the Parisians. Informal conversation of this kind is indispensable for getting a better understanding of the issues facing the Muslim and Jewish communities in Greater Manchester and Paris.

On Sunday, the group visited the traditional Jewish Parisian neighbourhood of Le Marais. Even though many of the shops have now become mainstream stores as the Jewish community has moved to other areas, there is still a vibrant atmosphere with long queues of people buying takeaway falafel and other kosher food at lunchtime.

After that, they visited the Museum of Jewish Art and History, where they received a personal introduction to the museum from its Director, Monsieur Paul Salmona.

Mohammed Amin summed up the weekend as follows. “I now have a much better understanding of the challenges facing France’s Muslim minority, and the different perspectives of French Arabs from Tunisia, Morocco and Algeria. I regarded as vitally important for French Muslims and French Jews to cooperate, surrounded as they are by a society which is increasingly non-religious.”

Heather Fletcher, Company Secretary of the Forum and the principal organiser of the trip from the Mancunian side said "It was an action packed itinerary. As well as visiting the institutions of Jewish and Muslim interest such as the Jewish Museum and Mosque, we also enjoyed a River Seine Cruise and a Paris by Night tour and still had time to socialise and bond with our friends from Shalom Paix Salam! We hope to continue our friendship with them and do our part in uniting Muslims and Jews across Europe."

The photograph below was taken in the bookshop of the Museum of Jewish Art and History. 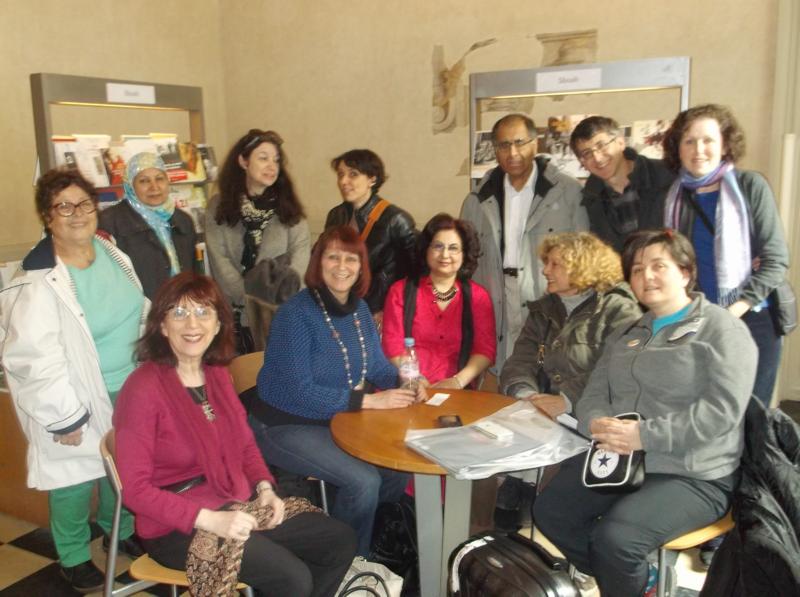