Four members of the Muslim Jewish Forum have enjoyed each other's company so much on previous overseas trips to Krakow & Auschwitz in Poland and Granada & Cordoba in Spain that we decided to travel together for a third time. On this occasion we visited Marrakech in Morocco.

The main theme of the trip was to visit places of Muslim and Jewish interest. The foursome, Mohammed and Tahara Amin, Qaisra Shahraz and Heather Fletcher stayed in the modern new part of the city called the Gueliz. On our second day, our guide also called Mohammed, took us on an organised full day tour of the old city of Marrakech.

He took us to the old Jewish quarter known as the Mellah. A Mellah refers to a walled Jewish quarter only inhabited by Jewish people. Jewish people had been present in Morocco since the first century but their numbers increased significantly in the 16'th century after their expulsion from Spain. Under Muslim rule in Morocco, Jewish people experienced a general climate of tolerance. In the early 20'th century a quarter of a million resided there but many left in 1948 after the establishment of the state of Israel. Today only 5,000 Jewish people live in Morocco and only 250 in Marrakech itself. 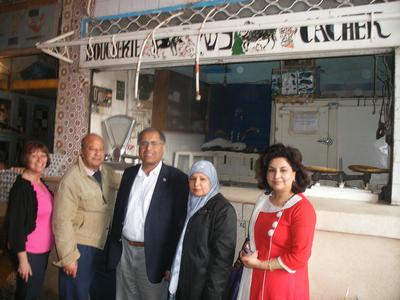 The travellers with Mr Shalom 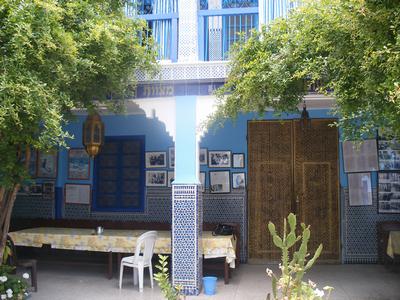 We visited the world famous Jamaa El Fna Square, the Saadian Kings' Tombs and the souks (markets) which one of our number really enjoyed! The places of Muslim interest which we visited included the Koutoubia Mosque,which is the highest building in the city and probably its most famous landmark. This was built around 1150 by the Almohad dynasty. 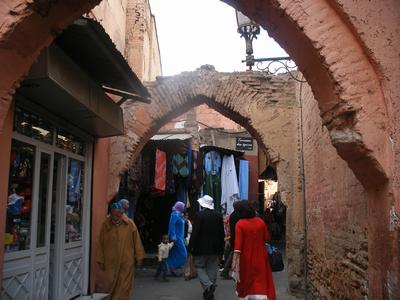 The intrepid travellers venturing into the souk! 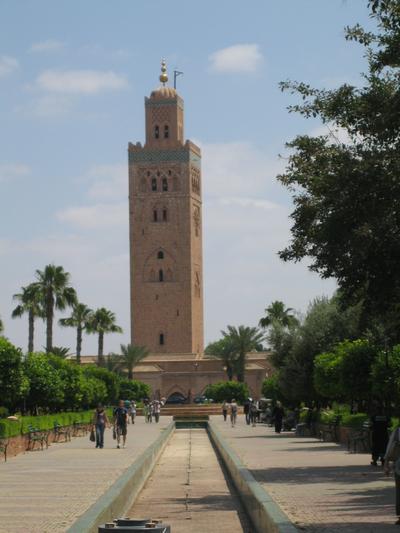 The Koutoubia Minaret, which dominates most views of Marrakech. Sadly the fountains were switched off while we were there.

We also visited the Medersa Ben Yousef (Quranic University - attended only by students who were able to recite the Quran by heart) This was founded in the 14th century and re built by the Saadian Royal Dynasty in 1570 and was used as a Quranic boarding school/University until 1960.

On the next day, on our open top bus tour, we saw a church located next to a mosque. Morocco is currently 98% Muslim but tolerance towards other religions is taught.

Overall, Marrakech is a fascinating city steeped in history and well worth a visit. One of our party, Heather Fletcher, has written the following poem about the trip.

Spring had started pleasantly and at the beginning of May
We travelled to an African country which was not that far away.

Our Hotel was in an area lined with pavement cafes and trees
It was situated in  the business district called the Gueliz.

One thing which was essential for our well travelled four
Was to see the main sights on an organised tour.

The old city was noisy and busy with cars and throngs of people everywhere
Especially in and around the colourful Jamaa El Fna Square.

The market stalls sold handbags, scarfs, silver and oranges as well
In fact I can't think of anything at all that they did not sell !

We saw the landmark Koutoubia Mosque and the oldest working Shul
The Saadian tombs, the Palaces and the Koranic Boarding school.

We met the city's only kosher Butcher still working there
And whilst having lunch, we heard the Mosque's call to prayer.

The Majorelle Gardens were picturesque and certainly a treat
And travelling on the Open Top Bus gave a welcome rest to our feet !

Something that always put us all in a very good mood
Were the Tagines, Cous Cous and the tasty Morrocan food !

I am  glad that we decided to visit somewhere which was different and fresh
And I'll always have vivid memories of our trip to MAGICAL MARRAKECH !