Along with Faith Network 4 Manchester, the Manchester Council of Christians and Jews, the Hindu Jewish Association and the Christian Muslim Forum, we hosted an ‘After Hijra, After Divali, After Bodhi Day, Chanukah & Pre-Christmas Party’ at the new Manchester MultiFaith Centre (MMC).

The guests were treated to seasonal specialities including mince pies and the traditional Chanukah doughnuts and potato latkes. To add to the atmosphere, Christmas crackers were pulled! Particularly nice was a strong contingent from the Hindu community, whose own festival of lights, Divali, was celebrated last month. Jonny Wineberg, our Co-Chair who is also Vice-Chair of the Faith Network 4 Manchester, gave an explanation regarding the festival of Chanukah and subsequently six candles were lit on the Chanukiah (8 branched candelabra) to celebrate the sixth night of the festival.

Heather Fletcher, our Secretary, said that, “Although the festival of Chanukah is about miracles, it was not a miracle to see all faiths come together at this party as all interfaith groups, especially our Muslim Jewish Forum, have gone from strength to strength this year. We shall definitely hold a Festive party again in December 2013.”

Qaisra Shahraz, Executive Member of both the Muslim Jewish Forum and Faith Network 4 Manchester, said, “This was a marvellous get together of all faiths and friends, from Manchester, Salford, Trafford and Bury, celebrating many festivals. Everyone had a great time, enjoying each other's company, sharing poems and watching the lighting of the candles to celebrate Chanukah.”

Jonny Wineberg said that, “The event recognised that all our faiths have positive messages about enjoying life and the organisations involved certainly express this enjoyment through their activities. MMC will be a venue for all these groups, and many other faith groups, to hold activities that will further celebrate diversity and bring harmony to our great City.”

Below is a photograph of Jonny Wineberg lighting the Chanukiah with guests looking on. 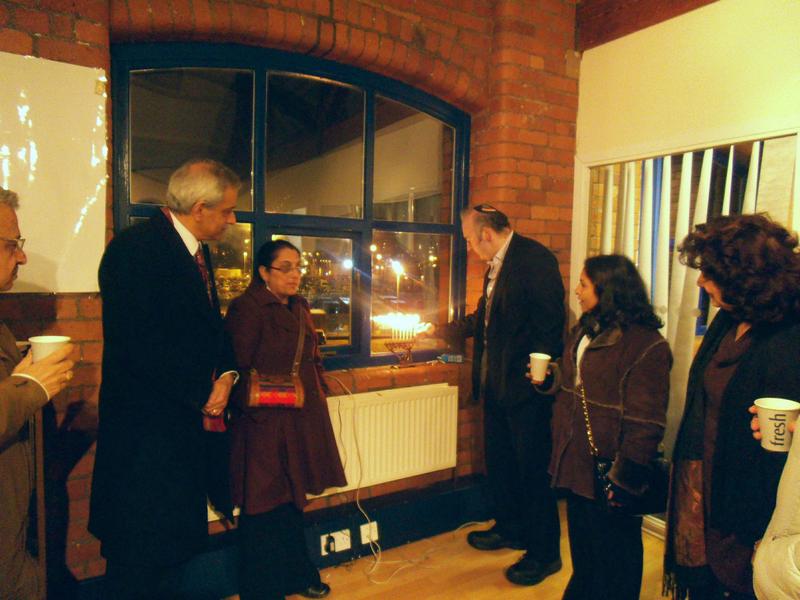