On Sunday 1 August 2021 we held our 14’th annual picnic in St Mary's Park, Prestwich. It was our first in-person event since February 2020 due to the coronavirus pandemic

Approximately 25 people attended. The weather was kind to the event and remained dry throughout. As a precaution against rain, the our Treasurer David Lewis, had brought and set up his gazebo but as things turned out it was fortunately not required.

The picnic was attended by Muslims, Jews and Christians from all over Greater Manchester, with one person coming from Durham. The participants included people born in France, Russia, the USA, and Pakistan, with ages ranging from 5 months to 77 years. The 5-month-old Esther became the youngest ever attender at a Muslim Jewish Forum picnic

St Mary’s Park is in Bury so Cllr Tamoor Tariq, the Deputy Leader of Bury Council, welcomed the participants on behalf of Bury Council. He had attended with his wife Irma even though the day was their second wedding anniversary! Other speakers included our Co-Founder Afzal Khan CBE, MP for Manchester Gorton, and our Co-Chairs Mohammed Amin MBE and Cllr Heather Fletcher.

Throughout there was a warm and friendly atmosphere and plenty of social interaction with people making new friends.

Cllr Nathan Boroda who is a newly elected councillor in Bury, stated "It was great to attend the Muslim Jewish Forum's first in-person event since February 2020. Events like this go a long way to showing our communities have so much in common. I can't wait for the next event."

Tahara Amin, our Company Secretary, said: "This was the first in-person event for the Forum, for my husband, and for myself since the coronavirus pandemic started. It was so nice to see people in-person at such an enjoyable and well attended event, even if, for health reasons, we were able not able to share food as we normally would at our annual Forum picnics."

The collage below includes all of the speakers as follows: 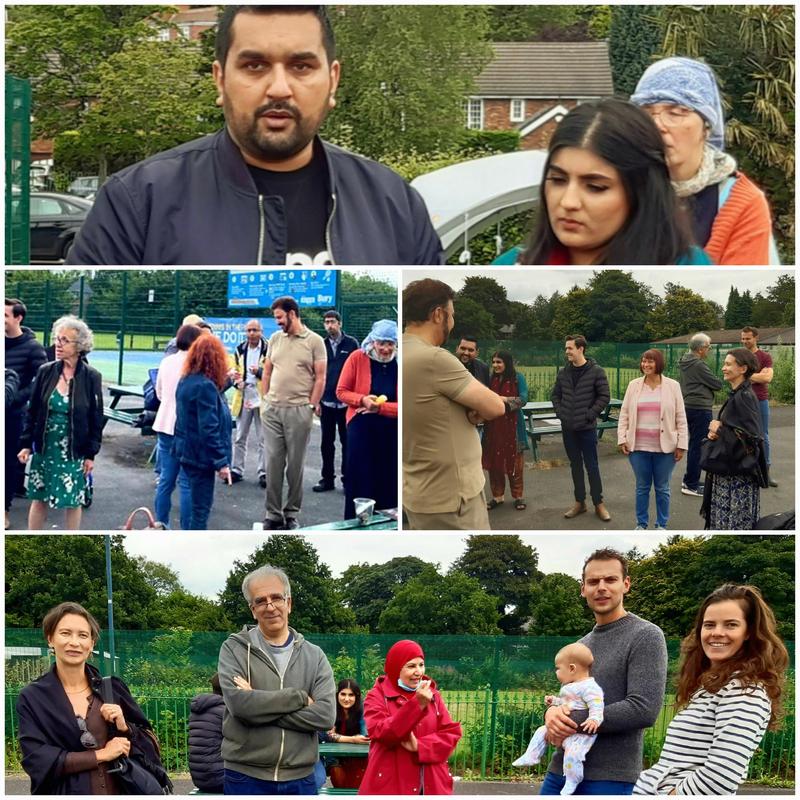