On 28 February 2021, using Zoom, we held the first ever Purim party in our history. We had a very varied programme for the participants to enjoy.

Our Purim party had a fancy hat theme. All 35 participants entered into the spirit of the occasion by wearing fancy hats or headgear. The event was compered by Co-Chair Cllr Heather Fletcher, with Co-Chair Mohammed Amin handling the technology.

The story of Purim — David Berkley

Executive Committee member David Berkley QC gave a full explanation of the history and traditions of the Purim festival.

David shared the story of how Queen Esther and her cousin Mordechai foiled a plot by the evil politician Haman to exterminate all the Jewish people in the Persian Empire. He also recounted how the Biblical book of Esther (the Megillah) is read out several times during Purim from a scroll.

You can watch David's talk below.

After David Berkley's talk, we turned to music. Dr Richard Fay had produced two excellent videos of klezmer music for the party.

The first musical number at the Purim party was a piece called The Flatbush Waltz which was originally composed around 1980 by the Klezmer and Old-timey mandolin and clarinet player Andy Statman. It was named for a community in Brooklyn, New York. The tune has three aspects which may be of interest.

First, Andy Statman is a key figure in the US development of klezmer, providing a bridge between the first generation of immigrant klezmorim and the current dynamic era of klezmer. His clarinet teacher was the klezmer icon Dave Tarras (who bequeathed several of his own clarinets to Andy). Dave Tarras (originally Dovid Tarraschuk or Tarrasiuk) was born in Ternivka in what is modern day Ukraine. He emigrated to the USA in 1921, and was a long-standing and highly influential klezmer clarinettist in the USA. His generation provide the direct link between klezmer in the Old World and the New World.

Second, Andy Statman plays clarinet and mandolin across genres (including klezmer and Old-timey). Although cautious about musical fusions, in 1986 he collaborated with the Irish traditional band, De Dannan (led by fiddler Frankie Gavin). The Flatbush Waltz formed part of that collaboration, featuring as Track 4 on De Dannan's 1988 album, A Jacket of Batteries. Several other klezmer tunes also made their way into the De Dannan set. Some sense of the value of that klezmer-Irish collaboration is evident in the review by Gideon Aronoff (2002. Available online at this link.)

Third, through the collaboration between Andy Statman and De Dannan, the Flatbush Waltz has also established itself in the Irish tradition, to the point that there are two slightly different versions of the tune now being played. In 2015, Manchester-based klezmer band L'chaim Kapelye (who entertained the Muslim-Jewish Forum on a couple of previous occasions) collaborated with Manchester Irish musicians including Mike McGoldrick, Dezi Donnelly and Angela Usher.

Together, these musicians explored an imaginary meeting of klezmer and Irish musical traditions. The resulting show, "Amid the Mirk Over the Irk" (conceived of by Richard Fay) has been performed at the Manchester Jewish Museum, and the Chorlton Irish Club, as well as for a lunchtime concert in the foyer of the Bridgewater Hall.

The video performance for the Purim party captures the current line-up of Amid the Mirk Over the Irk musicians, bringing a mix of klezmer and Irish sensibilities to Andy Statman's iconic tune, hopefully avoiding the perils of fusion to which he alludes in the above-mentioned review.

You can watch it below.

After the music began the comedy. The highlight of the event for many were the performances by two local amateur Jewish comedians, who had some of the audience in stitches. The first of these was Steven Pearlman.

You can watch him below.

Heather Fletcher on how to make hamantaschen biscuits

After Steven Pearlman, we had a cookery demonstration.

The traditional Jewish food eaten at Purim is the hamantaschen biscuit. It is a three-cornered biscuit as the hat worn by Haman was also alleged to be three cornered. Cllr Fletcher walked participants through the recipe and showed some hamantaschen she had made earlier with the help of her teenaged niece.

Our second comedian, Marilyn Berg, who is a comedy competition winner, shared some stories, claimed to be true, in her deadpan style!

You can watch her below.

You can watch him below.

The judges of the fancy hat competition were Company Secretary Tahara Amin, and Afzal Khan CBE MP who co-founded the Forum over 15 years ago with the late Henry Guterman MBE. The winners were David Berkley QC (dressed as Pharaoh) and Gillian Cohn, who wearing a big colourful hat, had joined the event from her home in northern Israel.

See them announce their results, and the reactions of the winners, in the video below:

Vote of thanks — Jackie Harrison

Executive Committee member Jackie Harrison gave the vote of thanks. You can watch her below.

The evening concluded with our second piece of klezmer music. This piece is known as "Wu Nemt Men A Bisel Baash?" although there are different transliterations of the Yiddish available. It translates roughly as "Where to get a little cash?".

It is a bulgar (in dance type). This was not a very popular dance type in the Old World (Pale of Settlement) but it really took off once klezmer 'emigrated' to the New World (USA). One reason for this is the proximity between the syncopation underpinning the bulgar and the syncopations so dominant in the swing era.

The origins of this tune are not very clear. It was probably written during Prohibition (around 1930) and it appears as "Bulgar No.18" in the Kammen International Dance Folio (1934) as linked to one Henry Weinstein. This book was the 'go to' resource of its time for all gigging musicians on the 'ethnic' scene including Jewish, Yiddish, Romanian, Greek, and so on.

This means it would have been played extensively back in the day. It came into the UK klezmer scene much later through a class at KlezFest (in London) led by Jeff Warschauer (a cantor and fine musician) who apparently learned it from an old 78 RPM record.

It was transcribed by the Edinburgh-based klezmer tuba player Simon Carlyle and entered the repertoire of musicians attending KlezFest, KlezNorth and other klezmer workshops. But, as yet, we know nothing about Henry Weinstein or about the record from which Jeff Warschauer learned the tune. It is something of a mystery.

The Manchester klezmer scene brings together musicians from various backgrounds including:

This wider community of musicians is sometimes called the Klezmorim of Manchester and on this recording (made during the ongoing pandemic) nearly 30 musicians contribute in a lively celebration of Manchester-related klezmer activity.

The title of the tune also seems fitting given the financial hardship now being felt by most professional musicians and also by the absence of bars in which to perform.

You can watch it below.

Franklyn Ellis (a first-time attender who is Christian) said:

"Thank you for a lovely evening. Although I was brought up in a Jewish area, I have never known what the festival of Purim celebrated; lovely to have the explanation, the music and the fun."

Anne Isaac (a regular attender who is Muslim) stated:

"A very informative and enjoyable evening. I learnt about the origins of Purim. I liked listening to the music which was very well played by the musicians and laughed a lot at the comedians and enjoyed listening to the recipe of the biscuits. Thanks to the organisers for preparing the event and keeping us going."

Julie Rosenfield (a first-time attender who is Jewish) said:

"As a newcomer, I am delighted to have attended this Purim event. It was a wonderful mixture of fancy dress, storytelling, comedy, klezmer music and Purim cookery. A lovely event filled with warm, welcoming people, fun, laughter and wisdom. What a wonderful introduction to the group and many thanks to all concerned. "

Below is a collage of the participants, who were encouraged to wear fancy hats. Our Co-Chair Mohammed Amin can be seen in the top row wearing a dunce’s cap. Co-Chair Heather Fletcher is top left in the same image. 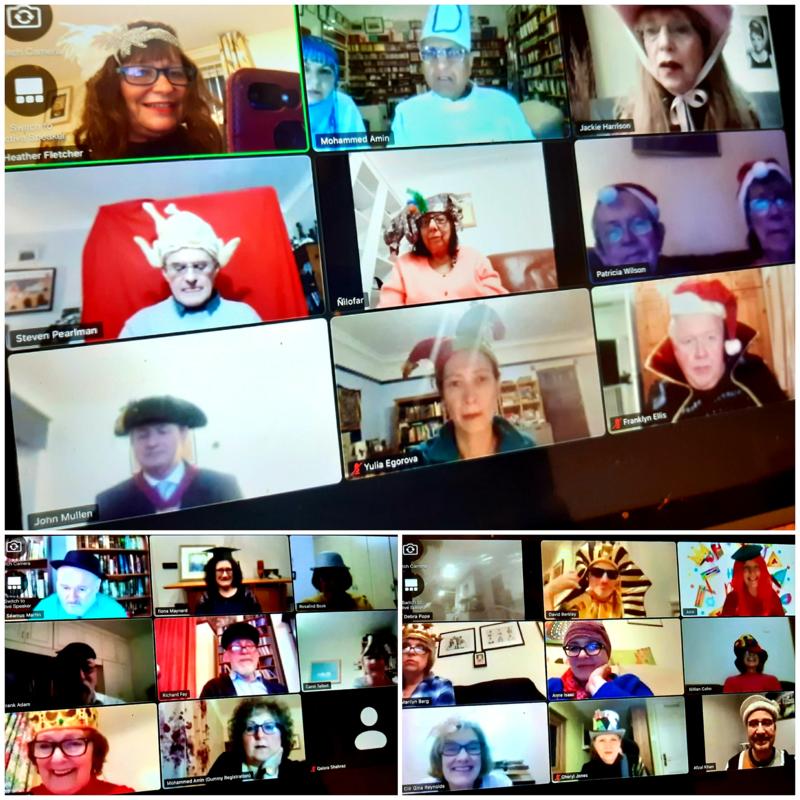