Spreading hummus and peace in Manchester

Tthe 2015 interfaith ‘Season of Twinning’ is an initiative of the New York based Foundation for Ethnic Understanding. The initiative, in which 30 countries around the world have taken part this year, promotes racial harmony and strengthening of relationships between different communities.

Manchester has led the way with its wide ranging ‘Twinning’ activities organised by Faith Network 4 Manchester (FN4M) based in Manchester Multifaith Centre in partnership with ‘We Stand Together’ and The Muslim Jewish Forum of Greater Manchester (MJF). The activities below involved both FN4M and MJF people, and in many cases people who belong to both organisations. It is obviously more important to make things happen than to worry about who to credit!

Between 8th November and 3rd December hugely enjoyable events were organised to celebrate the concept of ‘twinning’ with 2 universities, 5 schools, and most of Greater Manchester’s faith communities. Around a thousand school pupils took part with events having brief, inspirational speeches, informal chats and the display of banners with the slogans of ‪#‎SpreadHummusNotHate and #WeRefuseToBeEnemies to show solidarity. Food, and in particular eating hummus together, was central to all the events.

Qaisra Shahraz, an international novelist, author of the best selling ‘The Holy Woman’, and interfaith activist as Vice-Chair of FN4M, led the universities and school events. She said, “I viewed the ‘Season of Twinning’ initiative as a golden opportunity, which I wholeheartedly grabbed to promote messages of peace and community cohesion across all ages, institutions and faiths, so important in present times. We have had very positive responses from school children, teachers, university students, parents and community members who took part. All felt uplifted by their experience.”

Girls from King David High School and Manchester Islamic High School for Girls, along with their parents, twinned for a lively bowling session at Parrswood Entertainment Centre in Didsbury, arranged by their teachers, Rabbi Benjy Rickman and Jamila Kossar.

Jamila was thrilled by the outcome of the event: “It was truly a very inspiring evening. Not only did the pupils enjoy a game of bowling but were fully immersed in getting to know one another, sharing dislikes, likes and a whole lot of laughter. It was equally enjoyably seeing the parents relax and interact with one another and learn the dislikes and likes they have. Both parents and pupils thoroughly enjoyed the evening. The lanes had to shut down to get the pupils off them and parents were asking for a monthly meet up. Great twinning evening thank you and to King David High School for always being willing to participate.”

One Jewish parent, Ralphine Kay, shared her view: “At the interfaith ‘Twinning’ bowling session, the Jewish girls from King David High school had an enjoyable evening with positive interaction with the girls from the Islamic High School. It was also so nice to integrate with the mums, eat together and chat about the similarities we have and how we both have strong family values.”

Farhat Javid a Muslim parent echoed similar views, "It was really good talking to the Jewish mothers during the bowling trip. As it turns out we are very similar in our outlook for our children"

Withington Girls' School praised this ‘creative’ initiative in their tweet linked below:

Thanks v much to all involved in this incredibly creative way to promote peace & understanding #SpreadHummusNotHate https://t.co/CnZqNMwQwy

Cheadle Hulme School, in their blog, shared the benefits of this event for their pupils: “The students learned of the campaign’s slogan ‘We Refuse To Be Enemies’ and heard how people who practice different religions can work positively together. They also discovered the importance of taking time to understand challenges faced by different religions and the many similarities between Muslim and Jewish faiths. The students enjoyed sharing fruit, hummus, and pitta in a demonstration of unity between the two cultures. Qaisra left the students with pledges to ‘twin’ with another student from another faith, and to have the strength to challenge Islamophobia and Anti-Semitism, and to spend time learning about each other’s customs and cultures.”

Sara Bhatti, a Muslim sixth former from Withington Girls' School, enthused, “The ‘spread hummus not hate’ session was a perfect way to further strengthen the importance of our school's cosmopolitan environment which celebrates diversity. And we enjoyed the creative way of sealing our harmony with a greatly appreciated snack- spreading hummus!”

Similarly a Jewish pupil from Manchester Grammar School, Max Jacobs, commented, “Qaisra Shahraz and Heather Fletcher gave us a very interesting talk as it made us think about being more integrated with other students from the Muslim and Jewish communities, I thoroughly enjoyed the talk and hope to listen to more like it. We enjoyed eating and spreading hummus together.”

Bismah, in year 8 from Manchester Islamic High School for Girls, enjoyed interacting with Jewish girls: “It was really interesting to learn more about a different faith, I found it really knowledgeable, thank you ever so much.”

Heather Fletcher, Co-Chair of the Muslim Jewish Forum, spoke of her positive experience with the pupils: “It was my first session with teenagers. I was really impressed by the pupils’ willingness to listen and take on board what we had to say about ‘twinning’ with different faiths. And they put all this into practice when many of the Muslim and Jewish boys stayed behind to eat hummus together.”

Catherine Fuller, a Muslim student studying at Manchester Metropolitan University (MMU) speaks highly of her experience: “I was proud to speak on behalf of Muslim students at Manchester Metropolitan University on the peaceful values of Islam and how the Qur'an promotes unity among people. I am grateful to the Faith Network 4 Manchester for giving the Madinah society, and myself, the opportunity to help organise such a beneficial ‘Twinning -Spread Hummus Not Hate’ event for the students and community. Bringing people together in difficult times helps them to realise their numerous similarities and build bonds.”

The ‘Twinning’ started off with a highly successful event at Bury Town Hall’s Elizabethan Suite with local councillors, former Lord Mayors and members of the Muslim, Jewish and other faith and minority communities. Councillor Rabnawaz Akbar said, “The well-attended #SpreadHummusNotHate events across Manchester, bringing together individuals of all age groups from communities of all faiths and none, have highlighted all that is best in our City. The people of Manchester have sent a very strong message that, irrespective of our backgrounds and beliefs, #WeRefuseToBeEnemies and we want to live and work together to create a happy, peaceful world class City.”

The universities' event held in St. Peter’s House was a marvellous opportunity for members of all faith communities in coming together, networking, building friendships and interacting with students.  Eight MMU and University of Manchester students from Christian, Jewish, Muslim, Hindu, Sikh, Buddhist, Bahai and Jain faiths passed on their very original messages of peace and unity. Guest of Honour was Lord Mayor of Manchester, Cllr Paul Murphy with the Deputy Police & Crime Commissioner, Jim Battle, also a guest.

Suzanne Kanter, a technician in science and engineering at Manchester Metropolitan University, praised the opportunities for celebrating diversity and togetherness: “It was very encouraging to see many different representatives of different faiths connected to the societies within the universities. We all want one thing - to live together with tolerance of each other in peace and happiness. It is only by learning about each other and understanding and tolerance that we are able to create a safe environment for all. I was so happy to be part of this event and meet people who I otherwise would never have met. I look forward to many more events. Thank you Qaisra and your team for all your hard work in organising these events.”

Her husband Robert Kanter, a history teacher at Bury Church of England High School, attended the Greater Manchester community event at Bury’s Elizabethan Suite and thoroughly enjoyed himself: “It was refreshing and inspiring to hear messages of hope and unity. Events like this help us to develop greater community cohesion.”

Umer Khan, Chief Inspector with responsibility for cohesion for Greater Manchester Police, who actively supported the events, said, “Heartfelt thanks to the organisers for their tireless work, the vision and effort in planning and delivery of this wonderful event. Great to see so many lovely people, from all walks and backgrounds standing together on the platform of peace and unity, spreading hummus and discarding hate!”

Jonny Wineberg, Co-Chair of WeStandTogether in Greater Manchester and Convenor of the Greater Manchester Interfaith Network, said, “The We Stand Together initiative in Greater Manchester was proud to be a part of the Season of Twinning. We believe that bringing people of different faiths and from diverse communities together is essential to increase understanding and respect and build a better, and more peaceful, society, free from hatred, discrimination and intolerance. We look forward to many more such initiatives moving forwards.”

Some of the activities can be seen in the pictures below. 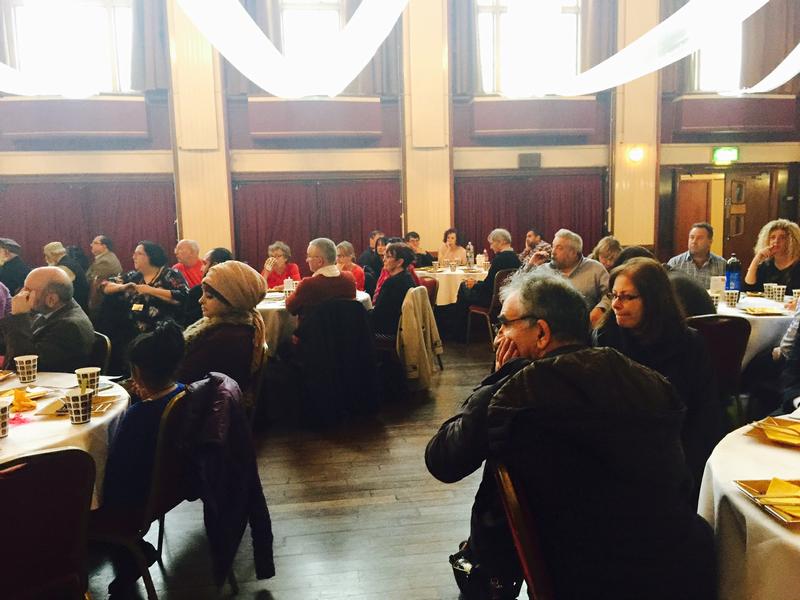 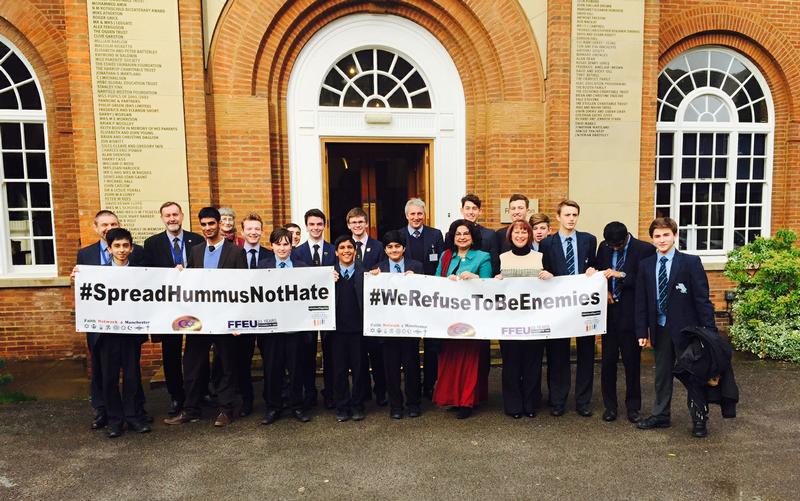 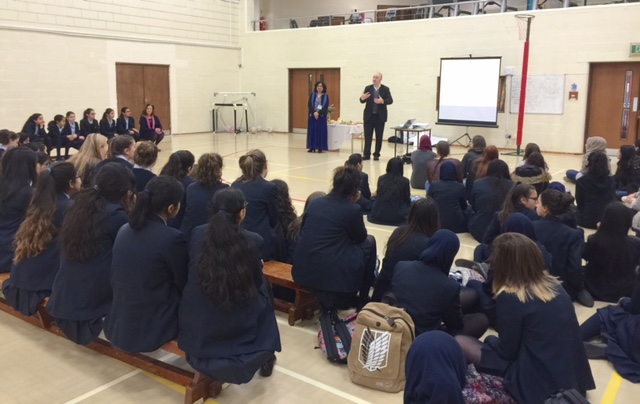 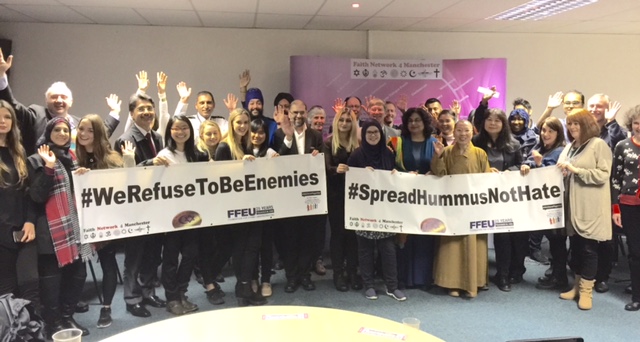