Commemoration of 25’th Anniversary of the Srebrenica Genocide

July 2020 marked the 25th anniversary of the greatest crime committed on European soil since the Holocaust, when over 8,000 Bosnian Muslim men and boys were murdered by Serb forces in and around Srebrenica, after United Nations forces failed to protect them.

As well as Aldin Zilic being from Bosnia, all of the other speakers had personal experiences of visiting Bosnia which they shared. What they found most horrifying was the way Serb people who were long-standing neighbours and friends of Bosnian Muslims without warning turned into killers.

Since we started using Zoom during the coronavirus pandemic, the Forum has recorded its online events. Unfortunately due to an error by Co-Chair Mohammed Amin, the first three speakers were not recorded. The video below begins with Heather Fletcher's short speech (4) above, and then has the two final speakers Kate Green and Aldin Zilic.

Below that, you can watch the 7-minute film “Srebrenica Revisited:25 Years on” which was played between speeches (4) and (5).

After explaining how in the Srebrenica genocide political leaders whipped up hate to divide communities, Kate Green MP shared her concerns about the present day:

“That is why I think it is so important that we proactively work together in every part of our society to prevent any chance for hatred or division to thrive. We have to act early because we realise how easily hate can come in and tear apart, with the most appalling consequences, communities that look successful, settled and harmonious.”

Aldin talked about his childhood in his hometown of Olovo, which was the birthplace of the famous Jewish painter Daniel Ozmo who was murdered in the Holocaust. When growing up, two of his best friends had been a Serb and a Croat, and the town was well integrated. Aldin, a Muslim, used to paint Easter eggs as part of the celebrations of the Orthodox Easter holiday.

At school, there was a regular pledge to Yugoslav values, which were similar to British values. They meant nothing when the genocide started. Olovo was in Central Bosnia and took in refugees from Eastern Bosnia because the ethnic cleansing first started there. His family managed to escape because Serb neighbours warned his mother that Olovo would soon be attacked by Serbs. They got out just before the attack took place.

Their journey to Croatia, hidden in a timber-carrying truck, would normally have taken six hours but took two days. Unfortunately, there was intense anti-Bosnian prejudice in Croatia which made it impossible to stay there; the charity Islamic relief organised their coming to the UK, with the journey to the UK taking only the same length of time, two days, that it had taken to travel from Olovo to nearby Croatia.

In the image below are the speakers apart from Heather Fletcher who took the photographs: 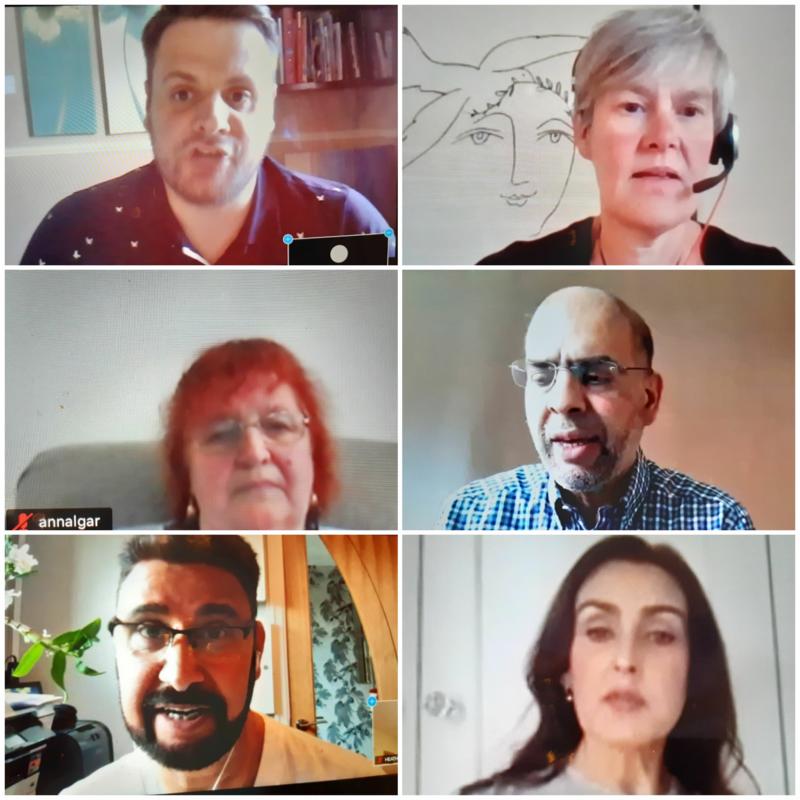