After the announcement on 24 June 2016 of the result of the UK Referendum on the EU, there was a sharp rise in race hate attacks throughout the UK, including within Greater Manchester.

In response, many of Greater Manchester's faith leaders, including our Co-Chairs Cllr Heather Fletcher and Mohammed Amin came together to launch an initiative to promote greater community harmony. The full story "We Stand Together" is on the Diocese of Manchester website and summarised below.

Statement on Community Relations after the EU Referendum Result

The statement is reproduced in full below:

We stand together as representatives of Greater Manchester's communities of faith.

Our different traditions unite in common concern for the welfare of our neighbour, whatever their age, social background, ethnicity, sexuality, gender or belief.

Many views were expressed during the EU Referendum debate. We recognise the strong emotions they awakened. But there is never any excuse for hate-crimes, intolerant language nor discriminatory behaviour. We are especially saddened by reports of the most recent incidents once the Referendum's outcome was known - and we declare ourselves in solidarity with all who have suffered as a result of them, many of whom have been made to feel they have no place here when this is their home.

Today, we call on all people everywhere to build on the foundation of the strong, cohesive, diverse and mutually supportive community that we know Greater Manchester to be.

We will sustain the welcome that we offer to all newcomers.

We will build bridges of understanding and trust.

We will remove barriers of suspicion and fear.

Through being open to one another, we will remain open to the rich traditions of faith that inspire us and that can nourish our common life.

We invite our people to take initiatives of kindness and care in their local neighbourhoods - to befriend, to visit, to represent or to help - especially including those who have been made to feel that they don't belong here.

Together, we shall demonstrate the truly inclusive and welcoming community we know Greater Manchester to be – and to recognize our citizenship in the one world that we all share.

We would urge anyone who is a victim of hate crime to come forward and report it to police. You will be listened to, you will be taken seriously. You can report online by visiting www.report-it.org.uk, or by calling police on 101. If you don’t feel comfortable going to the police, there is also a network of independent centres who will report the incident to the police on your behalf. You can find details of these centres atwww.gmp.police.uk/hatecrime

In the group photo below, the Bishop of Manchester is in the centre wearing a crucifix. Heather Fletcher is on his right, and Mohammed Amin can be seen behind his left shoulder.

Executive Committee member Cllr Rabnawaz Akbar was also present, although he is not listed among the signatories above. In the picture Police and Crime Commissioner Tony Lloyd is on the right at the front wearing a striped blue tie, and Rabnawaz is behind his right shoulder. 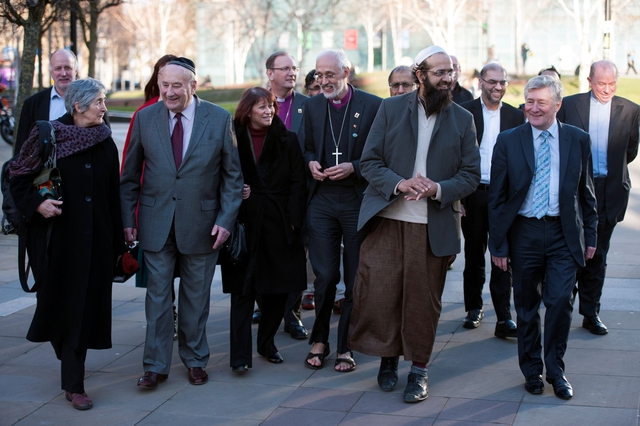