On Sunday 30 October, approximately 60 people attended an event at Salford Civic Centre in Swinton to mark the 9’th global season of twinning between Muslims and Jews. This is an initiative of the Foundation for Ethnic Understanding based in New York, USA.

The guests were welcomed by the Master of Ceremonies, Forum Co-Chair Mohammed Amin MBE.

All the speakers stressed the importance of mixing with people outside one’s own faith or ethnic community, and the need to spread a message of unity and peace especially in these days of rising hate crime. The rabbi and the imam spoke about the many commonalities between the Muslim and Jewish faiths.

As an unpublicised addition to the programme, Mohammed Amin and Cllr Heather Fletcher presented the Forum's Co-Founder, Afzal Khan CBE MEP with a crystal trophy for co-founding the Forum 11 years ago and for 10 years of service on the Forum’s Executive Committee. Afzal Khan had no notice that he was going to receive award, and was completely taken by surprise. He responded with an impromptu, heartfelt and poignant speech about the importance of all people of good will working together.

To close the formalities, Forum Executive member, Jackie Harrison gave the vote of thanks. Afterwards there were long friendly informal discussions between those attending facilitated by fruit juice, tangerines, kosher cream cakes, tea and coffee.

Judith Roberts stated "An excellent event with great speakers. Lovely to see so many like-minded people of different faiths who genuinely care about working together to bring unity to all"

Louise Brooks said "The event was enjoyable and interesting and there were positive speeches by different members of the community. We chatted over refreshments in a convivial atmosphere with people trying to create racial harmony in Greater Manchester"

Afzal Khan subsequently wrote the following about his award in his personal newsletter:

Last week I was honoured to receive a surprise award for more than ten years service to the Muslim Jewish Forum - which I co-founded in 2005. The forum exists to develop greater understanding and co-operation between the Muslim and Jewish faiths and runs a series of events and visits throughout the year.

It was a huge surprise, but also a tremendous privilege to receive this award and I want to thank the committee for honouring me in this way. Since I co-founded the forum it has been a pleasure to play my part in developing the organisation and watching it grow into the success it is today with both National and International recognition.

With all the tensions that exist in the world today promoting greater understanding between different faiths and cultures has never been more important. I continue in my role as a member of the European Parliament to fight against Islamophobia, Antisemitism and all forms of discrimination.

I hope the forum continues to go from strength to strength and I’m looking forward to another ten years of hard work to make that happen.

Below is a photo of all the living current and former co-chairs. The Forum’s other Co-Founder and first Co-Chair was the late Henry Guterman MBE. In the photograph from left to right are: 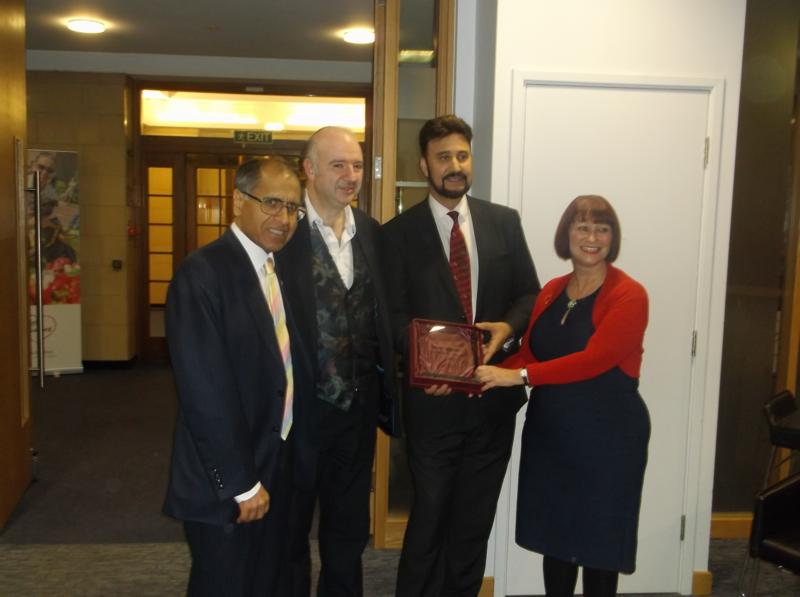