Manchester leads the nation on Visit My Mosque Day

Sunday 5 February was the countrywide "Visit My Mosque" day.

This is an initiative started three years ago by the Muslim Council of Britain. Many mosques around Britain opened their doors to the public to increase awareness of Islam. This is vital in today's difficult climate where people’s perception of the religion is clouded by myths and misunderstanding.

Khizra Mosque (full name UKIM Khizra Masjid) on Cheetham Hill Road in Manchester opened their doors to the public. The event was organised by brothers Jawad Amin and Sajjad Amin.

As this was the official national launch of "Visit Your Mosque" day, there was a very high-powered list of speakers:

Heather recalled how it was exactly 12 years ago, to the day, that she first visited a mosque. On that day, she met Mohammed Amin, Tahara Amin, and June Rosen for the first time.

Heather stated that she never imagined that these three people would become her holiday companions and they would visit mosques and synagogues together in many European cities. That day 12 years ago was also when Cllr Fletcher spoke to Afzal Khan for the first time, and he eventually helped her forge a new career in politics.

Heather concluded by saying that 12 years ago it was unusual for people to visit each other’s religious institutions but it was now less unusual. She hoped it would become less unusual still in the coming 12 years as it is ignorance which causes bigotry and mixing together and familiarity which promote understanding and tolerance.

The Forum and Khizra Mosque will jointly be hosting an iftar (a meal after a day of fasting during Ramadan) on Sunday 18’th June.

In the group photo below: 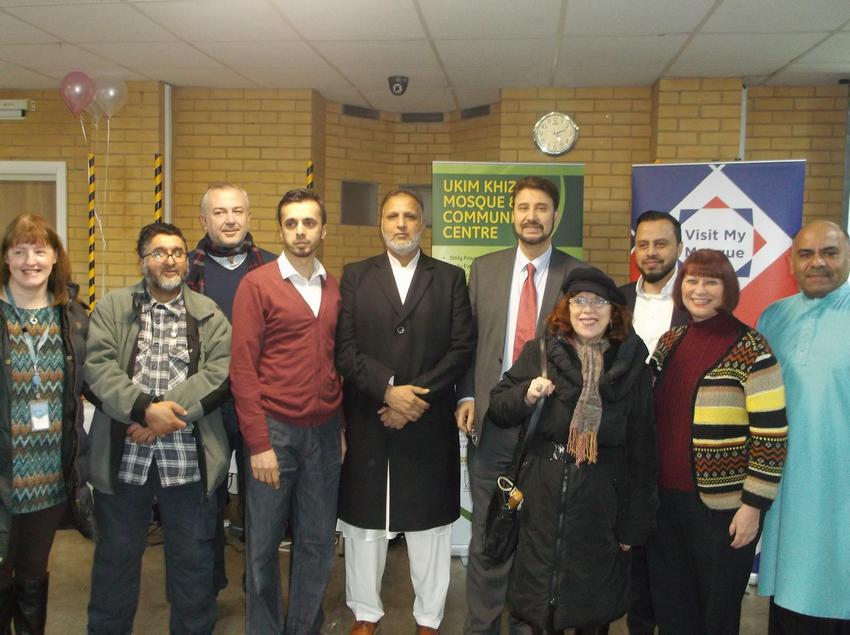