Forum speaks at "We Stand Together" event at Manchester Town Hall

We Stand Together, hashtag #WeStandTogether, is a national initiative led by the Association of Chief Police Officers. The Greater Manchester Launch took place at Manchester Town Hall on Thursday 5 March, and may have been the first one in the country.

The programme of the Manchester launch event is summarised below:

What is striking from the above programme is that the three religious representatives at (6) above were the only grass-roots speakers, and the MJF had 2/3 of those slots. This shows the recognition that the Muslim Jewish Forum has achieved in its 10 years of existence.

In session 10, Mohammed Amin was interviewed by BBC Radio Lancashire.

Session six was a triple act, with all three speakers on stage together. For coordination, before they went up, Mohammed Amin ascertained rougly what each of the speakers intended to cover and roughly how long they intended to speak for. Based on that, he proposed the above running order which was agreed to.

Amin spoke without notes. The text below is an approximate reconstruction from memory two days later. It cannot exactly reproduce what he said, but it does summarise his sentiments on the subject.

"I came to Manchester about the age of two, and have lived here ever since. Muslims and Jews care about many of the same things.

At birth, we believe in circumcision, and regard the freedom to circumcise as important. At death, we want non-invasive post-mortems, and believe that it is important to bury the dead quickly.

Between birth and death, we eat! When it comes to food, we regard the freedom to practice kosher and halal slaughter as important.

I believe Muslims and Jews are closer to each other than any two religions.

It is because Muslims and Jews have so much in common when it comes to life in the UK that 10 years ago we set up the Muslim Jewish Forum of Greater Manchester. Heather Fletcher will tell you about what we do."

Heather had a written speech, which she modified during the preparation. Accordingly the text below is from her script.

"This year our Muslim Jewish Forum is celebrating its 10th Anniversary. In the past decade we have organised over 70 diverse events ranging from Lawyers and Business Networking events and visits to Mosques and Synagogues and even overseas holidays where we have visited places of Muslim and Jewish interest together. Our mailing list has grown from a hardcore of ten people to over five hundred people. We hope that we have played some part in helping people from our two communities become acquainted with each other and forging friendships.

I believe that communities mixing together and finding out about each other’s faiths and cultures is the best way to achieve community cohesion. I, personally, have found it both very pleasurable and life enhancing learning about similarities and appreciating our diversity.

Finally, I believe it is ignorance and fear which causes suspicion and bigotry but it is understanding and familiarization which promotes peace and harmony in our society."

Revd Ashworth spoke from some outline handwritten notes. He covered Manchester's history of religious diversity and openness. If we can obtain additional details of his talk we will add them here.

The Rio Ferdinand Founation Video "We Stand Together"

We have embedded the video below.

The community montage can be seen in the photograph below. Immediately to the left of the montage is Revd Nigel Ashworth who spoke in session six, and to his left Mohammed Amin wearing the bright striped tie. 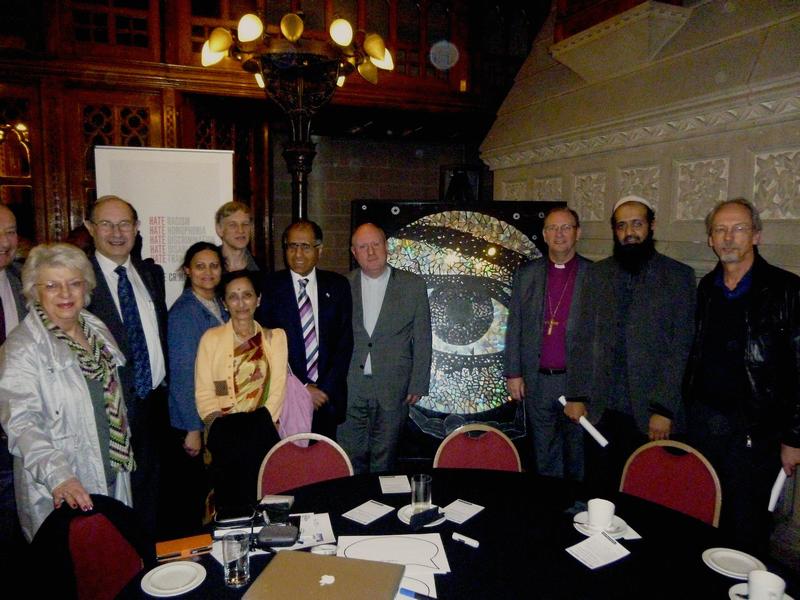