On Sunday 4 September, Mohammed Amin, Co-Chair of the Muslim Jewish Forum of Greater Manchester, at his own expense hosted a dinner for members of the Forum's current Executive Committee, and some past members, at JS Restaurant, Kings Road, Prestwich, Manchester. The venue was chosen because the restaurant is kosher, enabling both Jews and Muslims to attend and eat together.

The dinner was held to celebrate Amin having been awarded an MBE in the Queen's Birthday Honours List published on 10 June 2016.

The citation for the award reads:

“Member of the Order of the British Empire MBE

For services to Community Cohesion and Inter-faith Relations in Greater Manchester.

While the nomination was made without Amin's knowledge, after the list was published his wife Tahara informed him that the nomination was prepared by Dr Jacqueline Lewis, a member of the Forum's Executive, and supported in writing by several other current and past Executive members. Even without knowing that, Amin would have wanted to celebrate with the Executive, since it was clearly the work of the Forum that was being recognised by the MBE award to him.

Amin gave a short impromptu speech during the dinner. Amongst other things, he said:

"The Forum has changed my life. Before we established it, I knew Jewish people as professional colleagues and clients of my firm of PricewaterhouseCoopers, but I had no social contacts in the Jewish community. Despite living in Manchester for over 50 years, I had never set foot inside a synagogue. The Forum has lead to strangers becoming acquaintances who then became colleagues, who then became friends. The Forum is still going strong after 11 years because we set out with realistic goals, and operate in a way that makes sense for the people involved with the Forum."

The speech, which is only 5 ½ minutes long was recorded, and can be listened to below. It was recorded using an iPhone. As the restaurant was busy, there is a fair amount of background noise, but Amin's words can be heard quite clearly.

A group photograph taken after the dinner is below. From left to right are:

David Berkley QC also attended the dinner, but needed to leave early to take a train to London. 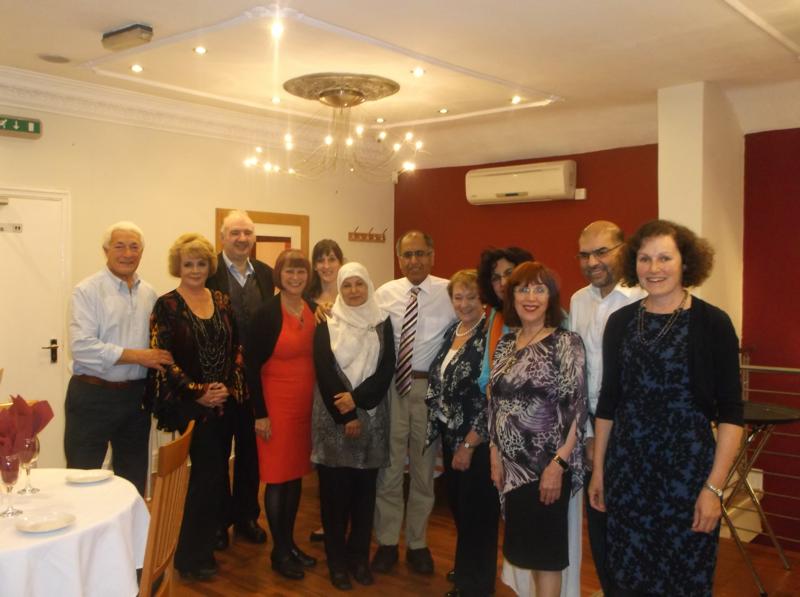