Over the last decade, some members of the Forum have travelled, at their own expense, to eight European cities to visit places of Jewish and Muslim interest.

Last week, they went to the ninth city, Bratislava, capital of Slovakia.

Bratislava, current population about 450,000, is located on the banks of the Danube River and has a long history. Under Hungarian rule for about 900 years, it was Hungary’s capital for over 250 years until 1783. The city was called both Pressburg and Pozsony until 1919 when, after the establishment of Czechoslovakia, it was renamed Bratislava.

Bratislava is Europe’s newest capital city, having become the capital of Slovakia following the so-called “Velvet Divorce” of 1993 when Czechoslovakia divided into the Czech Republic and Slovakia.

As with the rest of central Europe, Bratislava has a long history of Jewish settlement, interspersed with expulsions and pogroms.

After the September 1938 Munich Agreement which ceded parts of Czechoslovakia to Nazi Germany, Slovakia broke away from the rest of Czechoslovakia, establishing what became a client state of Nazi Germany, with the Slovak government of that time implementing anti-Jewish laws, and later on deporting Jews as part of the Holocaust.

The Manchester visitors were privileged to meet one of them, Ivan Pasternak, who had been hidden as a small child by a Slovak family during the war.

Today only about 600 Jews live in Bratislava. The group visited the only remaining synagogue, the Heydukova Street Synagogue, built 1923–1926 and designed in Cubist style by the local Jewish architect Artur Szalatnai. The Synagogue photograph below shows behind the travellers a permanent exhibition of photographs of Jewish life in Bratislava before the Holocaust.

Below from left to right are: 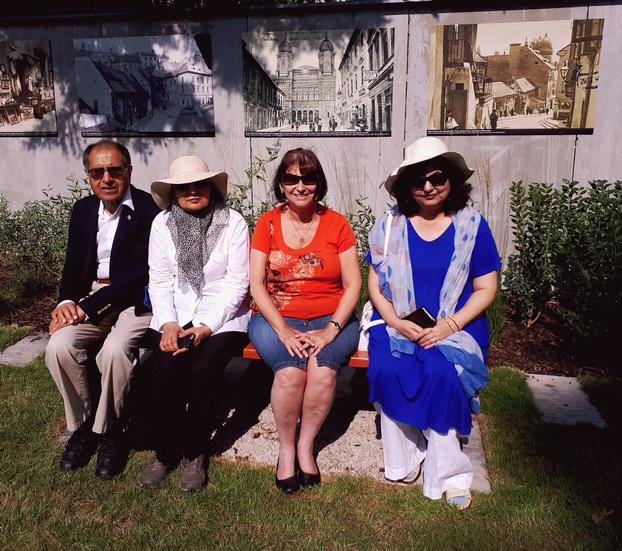 Bratislava also has a small Muslim community of about 1,000. Unlike some European countries where the resident Muslims primarily come from one overseas country, Bratislava’s Muslim population is extremely diverse. They face hostility from nationalist parties in the Slovak Parliament, who in 2016 increased the statutory size requirement for a religion to ensure that Islam cannot receive any of the benefits Slovakia provides for officially recognised religions.

Accordingly, there is no legally recognised mosque in Bratislava. However, the group were able to visit the Cordoba Islamic Centre where people can pray despite the lack of legal recognition.

The photograph below shows the interior of the Cordoba Islamic Centre. 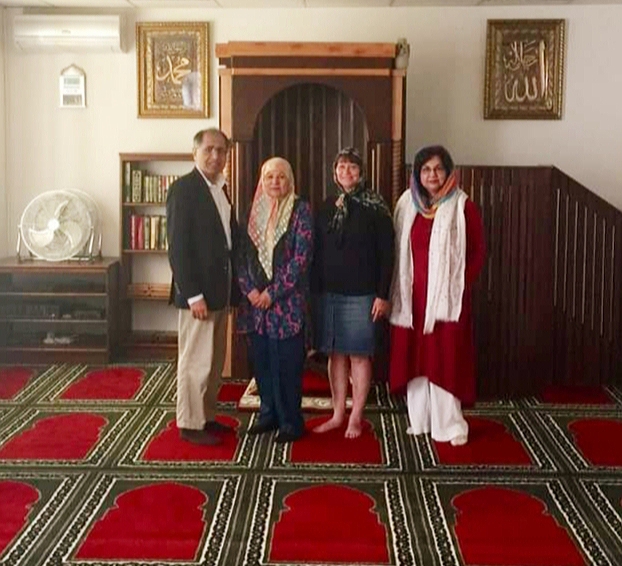