On Sunday evening 1 June 2014, thirty members of people from the Forum, including several first time attendees, enjoyed an excellent meal and convivial atmosphere at the Al Maidah Asian banquet hall and restaurant in Manchester.

Our Co-Founder Cllr Afzal Khan CBE, who had just been elected as an MEP, was presented with a celebration cake made and donated by the restaurant. He stated "The Forum has grown so much in the past nine years and it will always have a special place in my heart and I will continue to deliver its message in Europe"

The Forum's Secretary Heather Fletcher had written a poem for Afzal which she read out. It is reproduced below with her permission.

In the past he has driven Taxis and even a large bus
He drove them efficiently with a minimum of fuss!

He has been a Policeman on the beat
And even a Butcher chopping up meat!

He became a Councillor for Manchester City Council in Albert Square
And then in 2005, he became Manchester’s first Asian Lord Mayor

With Henry, he co-founded our Muslim Jewish Forum nine years ago
And he has seen our Forum win a National Award and steadily grow

His personality is warm, friendly, caring and he can also be witty
And he has vastly improved all Inter Faith relations in our city

He is very tall and an imposing figure but I am not sure whether he has big muscles
But I am certain that he will represent the North West people excellently in Brussels !

May your achievements continue to inspire everyone you talk to and see
I wish you all the very best in the European Parliament, AFZAL KHAN MEP

A first time attendee, Cllr Azra Ali, said "I really enjoyed the company; it was so interesting speaking to people who had varied experiences of life. It was an extremely enjoyable evening and I will attend future Forum events"

Heather Fletcher stated " I think in terms of equal attendance of Muslims and Jews, new faces and social interaction this was one of our best ever events. I think it shows that the Forum is in good shape as we enter our tenth year."

Forum Co-Chair Jonny Wineberg said “"These social events strengthen relationships and understanding between our two communities and run alongside the work we do on defending religious slaughter and circumcision, challenging antisemitism and Islamophobia and educating future generations about our faiths."

The picture below shows many of the attendees. Afzal Khan is seated next to the cake. 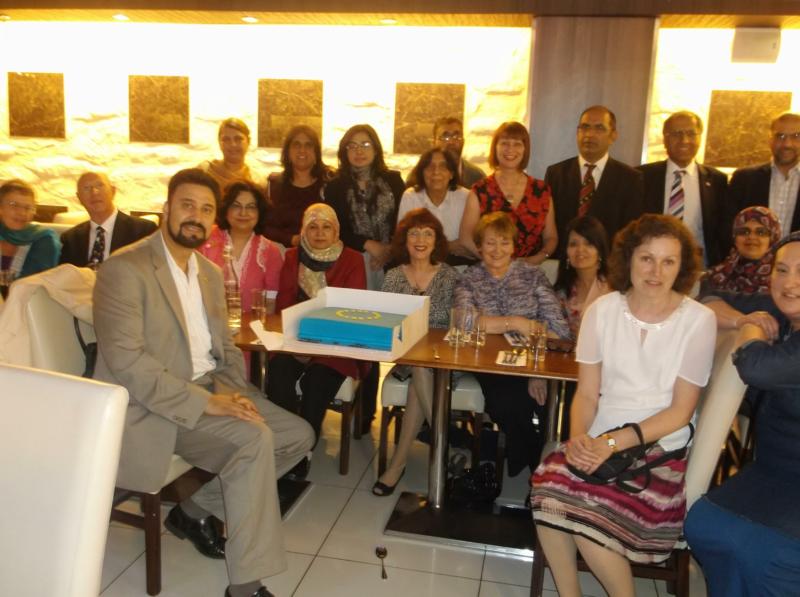