Eating and Our Health

It is well established that British Asians have a much higher incidence of diabetes than people who are white British. That is also true of Ashkenazi Jews.

Accordingly, on the evening of Sunday 20th November, we held a free event at the Manchester Multifaith Centre called “Eating and Our Health.” Like all Forum events, it was open to people of all religions and none, and was attended by Muslims, Jews and others.

The speakers were from our own Executive: Dr Jackie Lewis, Mohammed Amin and Jonny Wineberg.

They explained how eating healthily can reduce your risk of heart disease and diabetes, and shared strategies for dealing with diabetes if you already have it.

Dr Lewis took the audience through two hypothetical restaurant meals: a kosher meal and a curry meal. She explained the pitfalls of each by looking at the individual foods and pointing out the high levels of both fat and sugar.

Dr Lewis also discussed the cultures of both faiths, which can lead to over-eating, such as food being at the centre of social occasions, religious celebrations and family life. She encouraged participants to "eat like someone with diabetes", if a little less strictly, to avoid developing diabetes. Dr Lewis also advised the audience “snack on plain nuts rather than biscuits.” She explained that sugar is in 75% of processed foods and is a risk factor for raised blood pressure, heart disease, diabetes, cancer and dementia, so the ‘sugar tax’ is important for reducing ill health.

Mohammed Amin shared with the audience how he had a health ‘scare’ when his annual medical found elevated blood glucose putting him on the borderline of diabetes. He set out to reduce his weight from 87 kg to 63.5 kg, and achieved this over 12 months, losing a steady 2 kg per month. His strategy involved nothing more than weighing himself daily, writing it down, and becoming very aware of how many calories he was eating each day.

Amin explained to the audience that weight is entirely a matter of energy taken in by eating and energy used by living. If you take in less energy (measured in calories) than you are using, you weight will go down. You can either reduce the number of calories you eat, use up more calories by becoming more active, or preferably both.

His key advice was to look at all packaged foods to see how many calories they contain, as some foods contain far more calories than other. When cooking at home, he recommended the use of a ‘nutritional scale’, which is quite cheap. This allows you to weigh food, and when you key in the food’s code, will tell you how many calories are in the food on the scale.

Amin has put his slides, with sound, onto YouTube and you can watch his presentation below.

Jonny Wineberg explained that he has had diabetes since 2006 and has learned to manage this, with diet and a single medication. He initially had a single symptom of extreme thirst, which led to his diagnosis. He explained that other symptoms include tiredness, excessive hunger and blurry vision and that people should check with their doctor if concerned.

After being diagnosed, he quickly researched nutrition and made many changes to his diet, including stopping snacking, cutting out white bread, white rice and pasta and eating sweet potatoes in place of normal ones. He also recommended using small amounts of spray oil and stir frying; eating healthy fats, such as in olive oil, fish, nuts and linseeds and cutting out ‘nosh’ especially crisps. He also mentioned using sweeteners such as Stevia and minimising fruit juice, and that he carefully checks the labels on foods for carbohydrate and sugar content (4g is one teaspoon of sugar.) He also discussed exercise and promoted the importance of this.

The speakers were introduced and thanked for their informative contributions by the Forum Co-Chair, Councillor Heather Fletcher.

The attendees also enjoyed a healthy light refreshment buffet consisting of fruit, vegetables and nuts. The audience were attentive and responsive throughout and the speakers hope that they will now be inspired into leading a healthier lifestyle.

The photograph below shows some of the audience with the speakers. 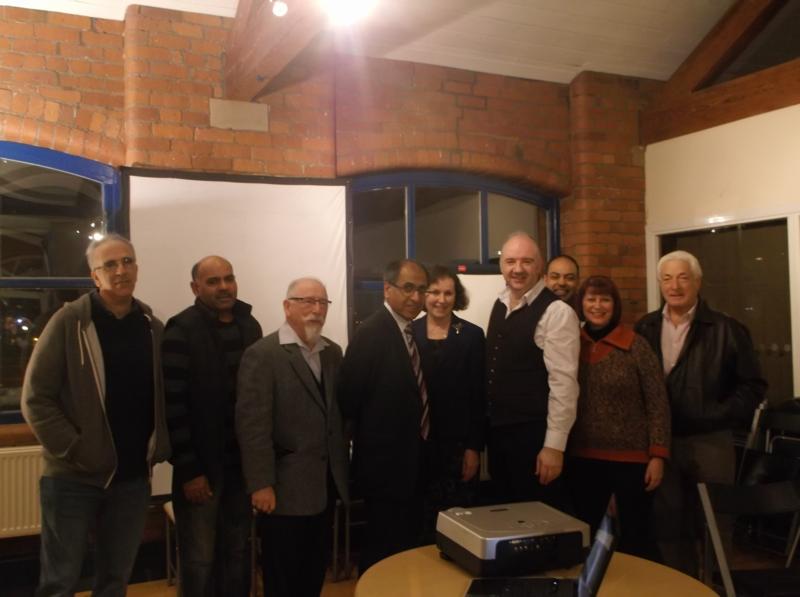