On Sunday 7 October 2018, 18 people participated in the Forum's trip to the National Holocaust Centre and Museum in Nottinghamshire. The Centre was established over 20 years ago by the Smith brothers (who are Christian) after they had been moved by their visit to Yad Vashem, the World Holocaust Remembrance Centre in Jerusalem. James Smith was interviewed by the Jewish Chronicle in 2009.

The group listened attentively to John Dobai, a Hungarian survivor. John was born in 1934 in Budapest to a middle-class Jewish family.

He recounted in precise detail how his happy childhood changed dramatically following the election of an extreme right-wing government in Hungary and the subsequent German occupation. John's grandparents were observant Jews, but his parents were not. Because they thought anti-Jewish laws were very likely to be made, they had John baptised and attended a Roman Catholic school.

Despite this, because all four of his grandparents were Jewish, John was classed as Jewish by the Germans. John recalled being made to wear a yellow star. If he met someone on the street who wasn't wearing such a star, he had to step off the pavement and walk in the gutter, which was a form of deliberate humiliation.

The Germans rounded up all Hungarian Jews from the countryside and sent them to concentration camps. When John's father returned from a Hungarian run labour camp in Russia he realised that the situation had become more dangerous for Jews in Budapest. So he went to the Swedish Embassy in Budapest and obtained Swedish passports for the family. These were supplied by Raoul Wallenberg, a Swedish diplomat, who had come to Hungary specifically to help those in danger of being murdered by the Nazis.

With these Swedish passports the Dobai family were able to move to a special "safe" house just three kilometres away. The house had a Swedish flag flying outside it which gave the family protection. Despite the fact the house had no heat, no gas, no electricity or water, the family survived the harsh winter of 1944 and were liberated by a Russian soldier in 1945. In 1948, the family were able to move to and settle in Newcastle Upon Tyne in the UK

John stated that the experiences he had been through in his childhood caused him to leave faith behind as a teenager, but stated "It is our duty to stop cruelty and harm to others." He showed the audience a table with the percentage of each European country’s Jews were murdered in the Holocaust. For Hungary it was nearly 70%.

The group were also escorted round the informative and creative "Journeys" exhibition which informs school children about how some Jewish children were given sanctuary in the UK, while having had to leave their parents behind.

The youngest person on the trip, 15-year old Fasih Mohammed, stated "Today was very interesting and I added to my knowledge of this important subject."

First time attendee, Anne Fine, said: "This trip brought new perspectives to knowledge of the Holocaust. A very moving and interesting place. The speaker was excellent."

Humanist Rita James stated: "An interesting, informative and very moving day. I would recommend the Centre to adults and children."

Stockport Councillor, David Wilson said: "Full credit to the Muslim Jewish Forum for organising this memorable trip to see the only Holocaust visitors centre in the UK. We heard from a Hungarian Jewish survivor and I urge anyone who is concerned about modern antisemitism to visit this Centre."

The photograph below shows the group in the garden outside the Holocaust Centre. John Dobai in in the middle wearing the striped tie. 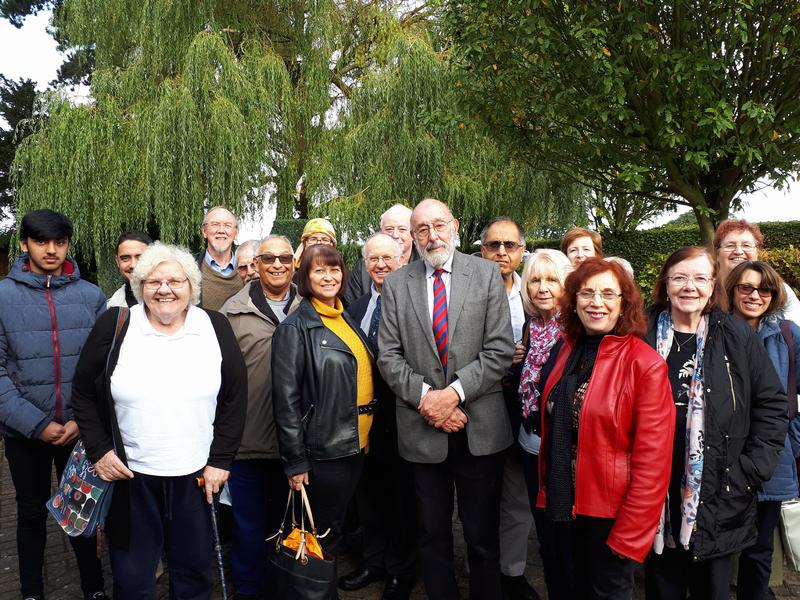