On Thursday 1 August 2013 the Manchester Multifaith Centre was packed to the rafters as over 60 people of all faiths attended an iftar. This is the traditional after the fast meal enjoyed by Muslims every night in the month of Ramadan to break their daily fast. The event was jointly hosted and organised by the FN4M (Faith Network for Manchester), the Muslim Jewish Forum of Greater Manchester and the Manchester Christian Muslim Forum.

The guests were welcomed by the Chair of the FN4M, Reverend Bob Day. The Lord Mayor of Manchester Cllr Naeem Ul Hassan attended and spoke about the wonderful diversity of Manchester and Cllr Afzal Khan continued to speak on the same theme and also gave an explanation about the customs and practices of Ramadan.

Thereafter the guests were treated to plentiful buffets of both Asian food and kosher sandwiches, fruit and Caribbean banana cake. There was a convivial atmosphere with considerable interaction between all guests.

Heather Fletcher, Secretary of the Muslim Jewish Forum said "I thoroughly enjoyed the evening, it was so pleasing to see so many people of all faiths attending and interacting with each other and even better to see that many were still there chatting to each other at 11pm!”

Reverend Bob Day, Chairman of FN4M, stated "This wonderful occasion was the first of what we hope will be many in Manchester Multifaith Centre which aims to bring people of many faiths together to share their concerns, beliefs and hopes. There was a real buzz of conversation and opportunity was taken to get to know each other and plan new actions together. I was also able to introduce Reverend Andy Williams, our new part-time Community Development Worker, to those present. We look forward to Andy creating new initiatives across the city for understanding and joint action among people of faith."

Ahmed Siddiq, Co-Chair of the Manchester Christian Muslim Forum stated “The Manchester Christian Muslim Forum has been holding an interfaith fast and dinner for the last several years, and it was our pleasure to sponsor this year's event held at the Manchester Multifaith Centre. This provided an excellent venue and it was a pleasure to see so many attendees. It was a shame there was no time to hear individuals' stories about how they coped with their first try at fasting - not made easy by the warm temperature and long daylight hours!”

In the picture below from left to right: 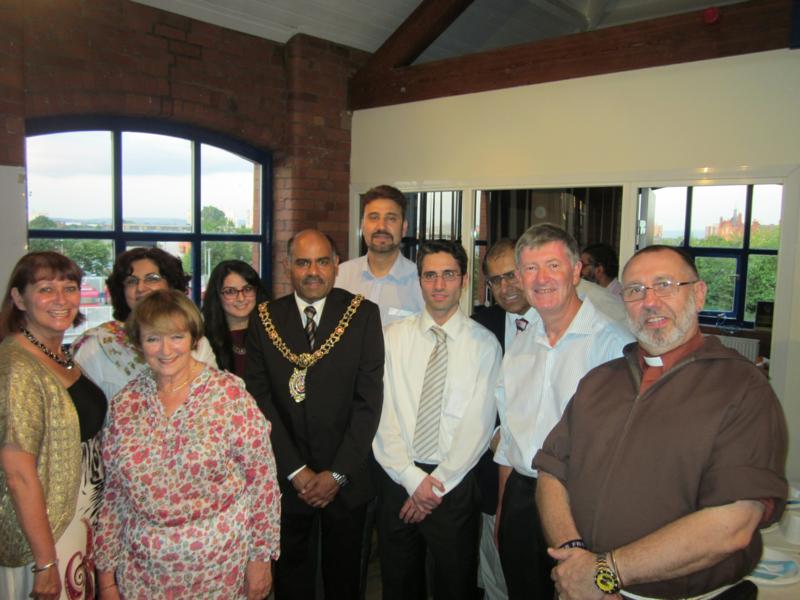