Food brings Muslims and Jews together

On Sunday 13 January 2019, the Forum’s members and friends gathered at Pagoda Chinese Restaurant in Prestwich to enjoy their annual kosher meal out together.

The event was a special occasion for two reasons:

This event was also a "Twinning event" to mark the annual Global Season of Twinning between Muslims and Jews which is an initiative of the Foundation for Ethnic Understanding in New York.

In total there were 20 diners consisting of Muslims, Jews and Christians from around Greater Manchester including Cheadle and Swinton.

There was a warm friendly atmosphere as the group enjoyed a delicious and plentiful Chinese buffet provided by restaurant owner Daniel Clayhills. He is standing in the picture below behind Tahara Amin who is wearing a white headscarf.

Various topics were discussed from football and food to politics and there was a true family atmosphere where people got to know each other's views.

Forum Executive member David Berkley QC, who is Jewish, (standing in the picture below behind David Lewis) stated "It was good during these fractious times to see communities coming together to share fine food and convivial conversation."

First time attendee Khalid Ahmed , who is Muslim, said "This was my first time attending a Forum event. I thought I might feel left out but it was a very inclusive evening and warm with great members. I thoroughly enjoyed the event and I anticipate joining many more Forum events."

Susan Mottram, who is a practising Christian from Swinton stated "It was a super evening. The food was excellent, and the conversations were most interesting. I felt really uplifted for having attended."

In the photograph below, seated on the front row from left to right are: 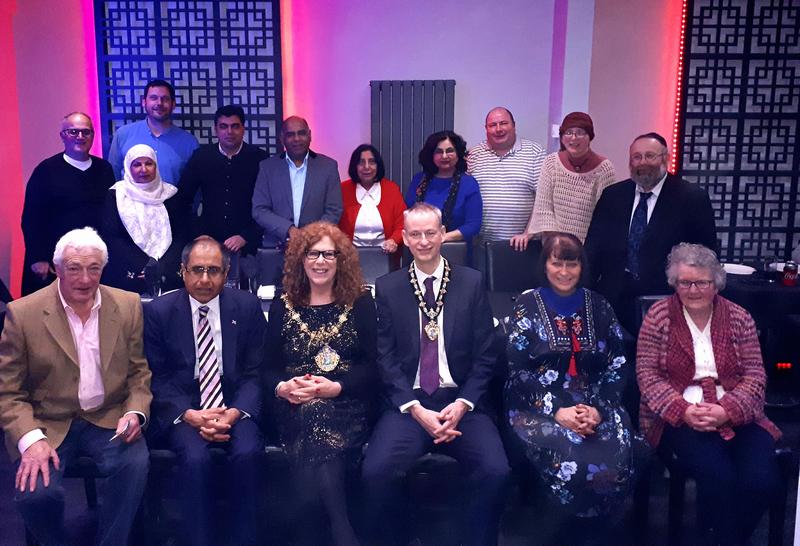