On 30 October 2014, the Muslim Jewish Forum of Greater Manchester held its eighth “Loose Lawyers” event at Kings Chambers in Manchester city centre. The event was sponsored by Linder Myers Solicitors. There was a 50 strong capacity audience who listened intently to the panel's views on the question "Is it ever right for governments to enact legislation against people's cultural or religious beliefs?"

The panel consisted of two Muslim barristers, Ahmed Nadim and Imran Shafi and two Jewish barristers, Andrew Singer and David Berkley QC. The latter, who is a Member of the Forum Executive committee, graciously stood in for Simon Hilton, who was incapacitated earlier that day. The Chair was Heather Fletcher who is a Solicitor and Law Costs Draftsman and the voluntary Company Secretary of the Forum.

All four barristers gave eloquent and thought provoking replies. The general conclusion was that governments should not enact legislation against people's religious or cultural beliefs unless it was to protect citizens from harmful practices such as female genital mutilation (FGM). Thereafter there was a lively forty minute question and answer session with considerable audience participation.

Mohammed Amin, Co-Chair of the Forum welcomed the guests at the start of the evening and Afzal Khan MEP CBE, the Co-Founder of the Forum gave the vote of thanks to conclude the evening before the attendees were treated to a light kosher buffet.

Helena Taylor, a law teacher and niece of HH Judge Charles Bloom QC and first time attendee said "I had a really enjoyable evening. I was made to feel very welcome and met many different people. The panel of eminent lawyers gave an erudite and engaging discussion of the issues"

Cllr Rabnawaz Akbar stated "Many felt this year’s event was the best yet. All four of the eminent panellists were excellent; their opening statements on the issue being intellectual and thought provoking. The audience rose to the challenge and what ensued was an enjoyable, lively and enthralling Q & A session."

In the picture below from left to right: 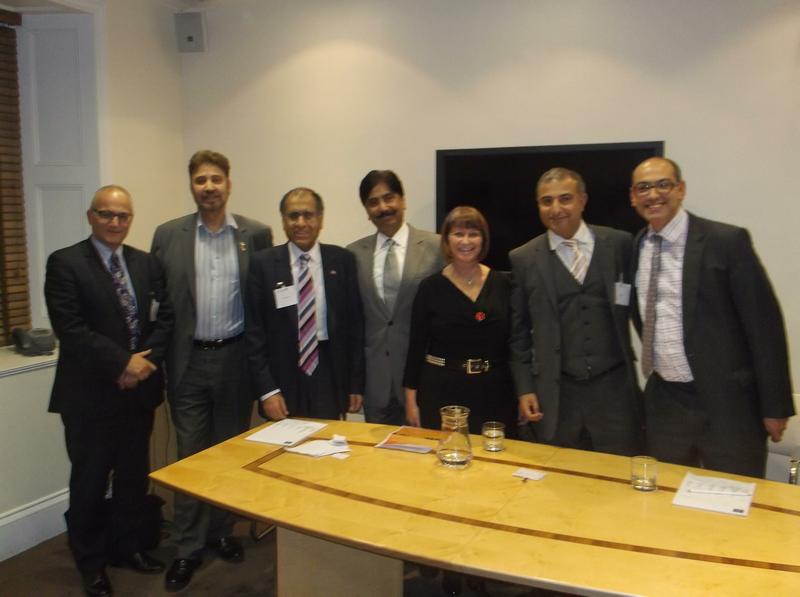