A delegation of high profile Muslim and Jewish leaders teamed up to visit the Danish Minister of Food, Agriculture and Fisheries, Dan Jorgensen, on 20 March 2014 at his office in Copenhagen.  The group, organised by Samia Hathroubi, co-ordinator of the Foundation For Ethnic Understanding (FFEU), was formed to work for the common good and to jointly respond to the growing Islamophobia and anti-Semitism in Europe.  In this case, they visited the Minister in response to his edict last month banning halal and kosher meat in Denmark on the basis of claims that Islamic and Jewish animal slaughter is cruel to animals.

The delegation urged that the ban be rescinded as soon as possible because, as they argued, not only is the claim against ritual animal slaughter scientifically debatable, but the edict itself also directly impedes on religious freedom and human rights.

Cllr Afzal Khan, Former Lord Mayor of Manchester and Co-Founder of the Muslim Jewish Forum is a Labour MEP candidate for the North West. He told the Minister that ‘it is very disappointing that the ban comes at a time when the Far Right is on the march in Europe and with the ever increasing Islamophobia that the Muslim community are facing in their everyday lives.’

Jorgensen defended his position stating that the decision to ban slaughter without prior stunning is a directive of the EU, of which Denmark is a member.  But Ms Hathroubi pointed out that the EU allows exceptions to this directive to religious communities and countries like France and Belgium have specifically sanctioned such exceptions.

Jorgensen stressed that while he stands by his ban on kosher and halal slaughter in Denmark, the Danish Jewish and Muslim communities can continue to import kosher and halal meat products.  He stated that whilst 20,000 people signed a petition against the ban, a petition in favour would gain even more support.  But the delegation retorted by expressing that the ban will simply reinforce ignorance, Islamophobia and anti-Semitism and does nothing to promote community cohesion, tolerance and understanding.

Cllr Afzal Khan, a community cohesion advocate of 25 years for which he was awarded a CBE, stated that the ‘with the recent rise of Islamophobic legislation in Europe, such as bans on minarets, the Hijab and male circumcision, the Muslim community is feeling vulnerable and fearful, and are left questioning whether they, as Muslims, have a place in European society.’  He further told the Minister that ‘you have chosen to send a signal to the Danish Muslim and Jewish community that you are standing against them and that under the cover of animal rights, you have attacked human rights.’

The law comes just weeks after the controversy over Marius, the 2 year old giraffe, who was publicly slaughtered and fed to lions at Copenhagen Zoo for being genetically too common, despite widespread protests and the offer of a British zoo to house him.  And in the further light of the fact that Denmark has a poor track record of humane factory farming standards and even legalises animal brothels, many question whether the ban was truly made in the name of animal rights or as a mere political stunt to appease a growing Far-Right faction in the run up to the elections this year.  Muslim and Jewish communities feel unduly misrepresented in all of this particularly as both Islam and Judaism strongly advocate humane and ethical treatment of animals.

The Minister stressed his respect for human rights and agreed to evaluate the ban if evidence could be provided that religious animal slaughter is not inhumane. Until then, Cllr Khan assuredhim that, "we will continue our campaign of International pressure on Denmark until it realizes the great hurt it is causing Muslims and Jews at home and worldwide, and rescinds this ruinous policy."

Participants in the Muslim-Jewish delegation that met with Minister Jorgensen included:

8. Kamran Shah, Religious Advisor to the Islamic Community of Denmark

There is a group photo of some of the participants below. Dan Jorgensen is in the centre holding some yellow papers and Afzal Khan is on his left. 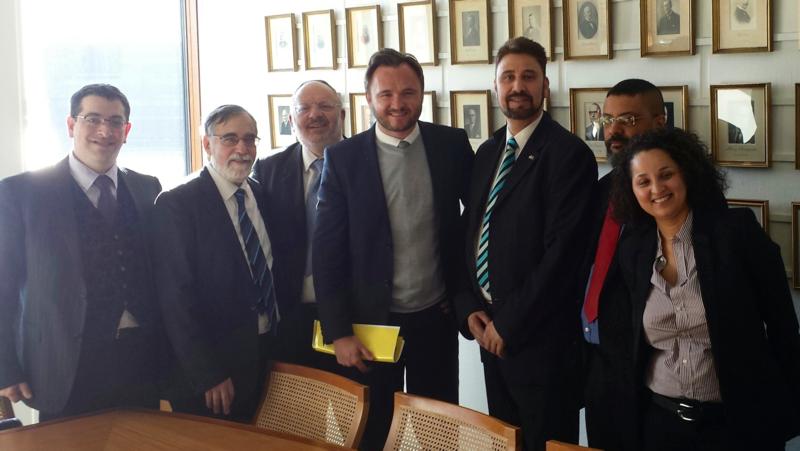